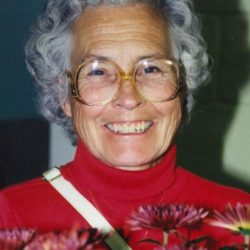 Jean Warnica passed away at HopeWest Hospice in Grand Junction, Colorado on October 23rd, 2019.  She was 87 years old.

Wilma Jean Morris was born May 25, 1932 five miles south of Montrose, Colorado at her grandparents’ farm on Spring Creek Mesa to Mary (Patching) Morris and Ruben Morris.  She lived at Montezuma when she was a baby and later at the Fish Hook Ranch near Dillon.  She entered first grade at Lakeside School near Heeney.  The family lived at the teacherage near the school.  Her mother was a teacher and her father took any job available.

Jean graduated from Montrose County High School on her 17th birthday, May 25th, 1949 and was the valedictorian.  Jean and Calvin Warnica were married July 1st, 1949 in Aztec, New Mexico.  After graduating from Parks School of Business in Denver in November 1949, Jean worked for the Burlington Railroad.  In May of 1950 Jean and Cal moved to Uravan and lived there for 10 years.  On August 18th, 1961 the Warnica family moved to Nucla.  Jean worked for West End School District in Naturita from 1963 to 1987.

Jean was a member of the Union Congregational Church in Nucla, Bethany Chapter #148, Rimrocker Historical Society, and the Uncompahgre Retired School Employees’ Association.  Her special interests were her family, fishing, camping, reading, and growing pretty flowers.

Jean is survived by her son Ted (Bonnie) Warnica, two daughters, Cherri (Dan) Cooper and Beverly (Mike) Bouwkamp. Jean is also survived by her grandchildren: Brittany and Robyn Warnica, Rick and Stacie Becker, Jessi (Ryan) and Dylan (Sarah) Cooper, Michelle (Anthony) Bonanno, and Kelly Bouwkamp.  She is also survived by her six great grandchildren: Calvin and Lisa Sutherland, AJ and Mia Bonanno, and Oscar and Vivian Cooper.  Jean was preceded in death by her parents, her husband Cal, her sisters, Dorothy Thompson and Rose Brown, and her grandson, John Calvin Bouwkamp.  In lieu of flowers, memorial contributions can be made to Union Congregational Church Box 367, Nucla, CO 81424 or HopeWest 3090 North 12th Street #B, Grand Junction, CO 81506.  Services for Jean will be held at Union Congregational Church at 10:00 am Tuesday, October 29th.