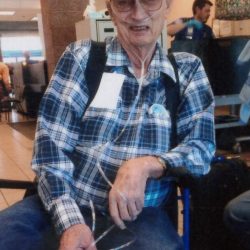 services, with a reception to follow internment at Valley Lawn at 10:00 am Monday, December 17th,

Funeral and reception will be held at St. Mary’s Catholic Church. All are welcome to attend and

Bill is survived by his son, Robert “Bobby” Kettle, of Grand Junction; son-in-law Jim Langford, of

Eric and Heather Langford, of Montrose; as well as his great grandchildren Glen Langford, Joseph

Kettle from Nevada. He is preceded in death by his wife Alice, daughter Connie, and son Billy as well

as his parents and three brothers.

Bill was born on September 14, 1923 to parents William Bryan and Ellen T. Kettle at their farm in

Colona. He spent his youth near Colona helping at the family farm. After graduating from

Ridgeway high school Bill was called to serve his country in the Army during WWII. He served in the

After the war he came home to work with the Denver and Rio Grande Railroad in Denver. He

allowed him to travel. During his years with the railroad, he also worked construction on the bridge

crews and for the tunnels and portals. He married Alice Everitt on May 27, 1950. Together they

moved around the state with the railroad until they finally settled in Uravan, Colorado. He worked for

Union Carbide as a mechanic, welder, and electrician for 30 years. He was commended with a

service award by the State of Colorado for his years with Union Carbide. During this time he became

active as a volunteer. His lifelong motto was “The more you give, the more you have to give.” He

volunteered for the VFW, operating the concession stands for the little league ball games, he helped

with the scouts, was a volunteer EMT for over 10 years. Bill was also a member the the Sheriff’s

Posse and Search and Rescue Team. He also served on the Region 10’s Board for the West End.

Bill retired from Union Carbide in 1985 and moved to Montrose, where Bill worked as a security guard

for Russell Stover Candies until he was 85. Bill and Alice continued their volunteer work by serving

as the longest running delivery drivers of “Meals on Wheels” in Montrose, delivering RSVP “Santa

Center dining room, working as a handyman for local seniors, and giving numerous hours in service

services, with a reception to follow internment at Valley Lawn at 10:00 am Monday, December 17th,

Funeral and reception will be held at St. Mary’s Catholic Church. All are welcome to attend and

celebrate Bill’s life. The family would like to extend our sincerest thanks to all of the caregivers that

allowed Bill to live the last stage of his life comfortably at his home. Their contribution to our peace of

mind and Bill’s comfort cannot be overstated. Arrangements are being handled by Crippin Funeral 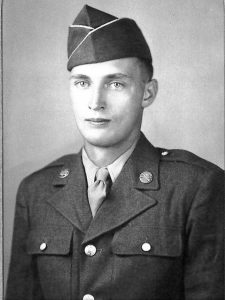