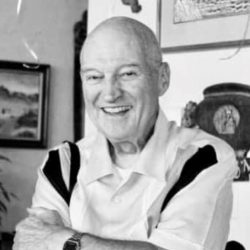 A memorial service will be held in his honor Saturday, September 18 at 10 am at Crippin Funeral Homes, 802 Main St., Montrose, CO. Instead of flowers or gift, please donate in memory of Bill: Colorado Friends of Himalaya, PO Box 2022, Montrose, CO 81401.

“Bill is Love”, said his friend of 50 years. That is how we remember the man, William (Bill) Trueblood Duckworth, as he left his human form and passed on September 9, 2021, in Paonia, Colorado. Love: his life was full of adventure and traveling, and most of all, connecting with people and actively sharing life and love along the way with whomever crossed his path.

Bill was born in Lafayette, Indiana on May 25, 1938, to John B. Duckworth and Mee-maw (Martha) Trueblood. After the family moved to Valparaiso, Indiana, he and his brother, John, spent the summers of their childhood working and playing at the hills and fields of their grandparent’s farm in Paragon, Indiana. After graduating from high school, Bill joined a friend’s family on a life-charting trip to Colorado, where Dad climbed his first mountain and experienced rugged and exciting mountain scenery.  Indiana no longer held interest for him, and after a single year at Indiana University in Bloomington, he transferred to Denver University in Colorado where he completed a degree in finance.  During the summers while in college, he worked for the Forest Service in Oregon and Colorado, fueling his love of the outdoors.

He married Essie (Forbes) Pettersen in 1962. His solid skills in personnel relations allowed him to move up the ranks in the Forest Service in Colorado, Idaho, and Montana. Two children, Kris and Shane, came from this marriage, which dissolved in 1978.

Bill married again in September 1980, Ruth Dickman, inheriting two kids (Kristine Sødal and Dave Highness) and Zipper the Dachshund.  He took on the position of Personnel Director of the Alaska National Parks. The family, extended family, friends, and stragglers visited nearly every forest, mountain, river, and bluegrass festival in Alaska in the early ‘80s. During this time, Ruth and Bill visited Mexico, the first of many international trips Bill would eventually embark on during his life. In 1982, Ruth was diagnosed with lung cancer. During the last months of Ruth’s struggle for life, Bill and Kristine organized a Terry Fox running event for the American Cancer Society in Anchorage. Bill was a doer, and this was his way of grieving and living.

Two years before retiring from federal service, Bill met the love of his life, Nora Vallester Duckworth. They married at Nora’s hometown of Balingasa, Philippines in 1991, and then made a home in Denver. After retirement, they moved to Montrose, Colorado in 1996, and built a passive solar home with Shane’s and Kris’ families. During this time, Nora and Bill made several trips to Nepal and founded an organization “Western Colorado Friends of Tibet” (now “Western Colorado Friends of the Himalaya”). They worked hard to gain political asylum for multiple Nepalese and Tibetan people, and adopted Jigchen (from Tibet), Radhika (from Nepal), and Nima (from Solukhumbu). The organization continues to support communities, children, and families, much as Bill and Nora initiated. Simultaneously, Dad encouraged Nora to follow her dream of working to finance all her nieces and nephews’ college admissions, often making several trips together to the Philippines to visit family and bring the Philippine and American families together.

Bill embodied the “helping hand” to assist people to reach their own potential and understand each other, no matter their culture, race, gender, or creed, both personally and professionally. Life-giving goals were to hike or climb to all high points in every state, to hike or climb to every 14000-foot peak in Colorado, to visit every National Register of Historic Places and Landmarks and National Parks in the U.S, and to visit every continent on Earth. In the last decades of his life, Nora and Bill did these things together, and he did them with memorable passion. We are thankful for the days we had with him, and we will miss him.

A memorial service will be held in his honor Saturday, September 18 at 10 am at Crippin Funeral Homes, 802 Main St., Montrose, CO. Instead of flowers or gift, please donate in memory of Bill: Colorado Friends of Himalaya, PO Box 2022, Montrose, CO 81401.