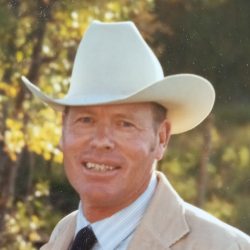 Services will be held Friday, October 29, 11 am at Christ’s Church of the Valley in Montrose.  Interment at Grandview Cemetery.

Wayne Everett Wolff went to be with his Heavenly Father on October 25, 2021 at the age of 85.  He was born June 19, 1936 in Cortez, Colorado.  He attended first through eighth grades at Lebanon School and graduated from Cortez High School in 1954.  At the age of nine, he became a member of 4-H, later served many years as a leader, and has supported 4-H and FFA throughout his life. He married Mary June Wiman, July 21, 1957 in Dolores, Colorado.  They moved to Eads, Colorado in 1963 and later to Montrose in 1969.  He worked for Gifford Electric and RE1J Schools.  He served seven years in the Colorado Army National Guard.   In 1985 he became the manager of Wolf Land and Cattle Co. in Ridgway.  He served on many agricultural boards and was a lifetime member of the Montrose and Ouray Cattlemen.  He is survived by his wife, Mary June, daughters Pam Wing (Ralph) of Parowan, Utah; Twila Brown (Jeff) Olathe, Colorado, and sister Esther Cook (Jim) of Mancos, Colorado.  Six grandchildren, and thirteen great-grandchildren.  He was preceded in death by his parents, Mathew William and Edna (Everett) Wolff and  sister Edith Sherwood.

Services will be held Friday, October 29, 11 am at Christ’s Church of the Valley in Montrose.  Interment at Grandview Cemetery.