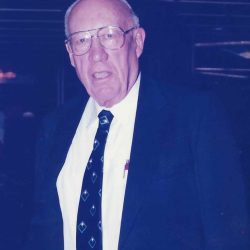 Celebration of Life Services are planned for Thursday, August 29, 2019 at 10:00am at Montrose Christian Church. Burial will follow at Grand View Cemetery.

In lieu of flowers, donations may be made to the Volunteers of America, Senior Community Care PACE of Montrose or any charity of your choice.

After enduring the many infirmities of advanced age with stoicism, humor and an iron will, Wallace passed away at his home in Montrose, surrounded by family on Thursday August 22, 2019. He was 98 ½ years old.

Wallace was born on New Years Eve, December 31, 1920, in Silverton, CO at the Miner’s Union Hospital to Lew (L.W.) and Elva (Glanville) Parcell. He was their only child.

He had an idyllic Silverton childhood, with many friends, who remained so throughout his life. He named his only son Robert after his best friend, Robert Plantz, who was killed during WWII.

Wallace grew to be quite tall, 6’2”. He was very skinny during his teens which earned him the nickname “Spike”, which stayed with him his entire life.

Some of his fondest childhood memories were of helping out at the Carl Burgeson Dairy in Silverton. He recalled helping deliver milk, by horse drawn cart, on frigid, below zero mornings. The fog would come up off Cement Creek and the horses were fearful to cross the bridge. He would get out and lead them across. He also recalled delivering milk to the “soiled dove”, Big Billie, as she stepped out from her bath. He would laugh, saying she WAS a big woman!

Wallace graduated from Silverton High School with the class of 1938. After graduation, he worked at the family owned Circle Route Garage. He joined the United States Army Air Corps (the precursor to the U.S. Air Force) on January 9, 1942 – just one month after the bombing of Pearl Harbor. After completing Basic Training and “Propeller School”, he was shipped overseas to England in May of 1943, on the converted troop ship, The Aquatania. He recalled a band playing “Hold That Tiger” as the troops walked up the gang plank.

Upon arrival in England, he was assigned to the United States Eighth Air Force Base at The Ridgewell Aerodrome, near Great Yeldham, Essex. His was the 381st Bomb Group (H), Station 167. Wallace was a “Propeller Specialist”. He worked in the prop shop repairing and balancing the over 6 ft long propeller blades for the B-17 Bombers- aka the “Flying Fortress”. He ultimately attained the rank of Staff Sergeant. He was a true member of The Greatest Generation.

After the war, Wallace returned home to Silverton and married “the girl who waited for him”, Catherine Giacomelli. They were married in Silverton on July 21, 1945, a union that would last 59 years until Catherine’s death in 2004.

The couple had 3 children. The family remained in Silverton until 1963 when they then moved to Denver, and later, to Golden, CO. Wallace and Catherine would live there for the next 37 years.

Wallace worked at the Rickenbaugh Cadillac Dealership in Denver for almost 25 years. He retired from Rickenbaugh in July of 1988. He and Catherine moved to Montrose in 2000 to be closer to family, where he remained until his death. He was an auto mechanic and “Car Guy” by profession; a “Mr. Fix-Anything”, mostly by necessity; a loving and generous father and very proud grandfather and great grandfather. He will always be remembered for his many great qualities, as well as for his deep, resonate voice.

In his younger years, Wallace enjoyed many horse packing trips with his father and family friends, into the high country around Silverton to fish and hunt. He had a lifelong love of all animals, especially dogs. And dogs loved him. After retirement, he and his wife, Catherine, enjoyed travelling in their motorhome. They toured the entire Western U.S. as well as trips into Mexico and Canada. After travelling became difficult, he took a lot of pride in his home and park-like yard. He always enjoyed watching Sunday Bronco games and was a loyal fan. He also loved to watch old Western TV shows and “Cowboy Movies”.

Wallace had a 74-year Continuous Membership in Post 14 of the Silverton American Legion. He was also a Life Member of the Ouray Elks Lodge #492 for 74 years.

Wallace was preceded in death by his parents, Elva and Lew Parcell, and his wife of 59 years, Catherine. He is survived by his 3 children; Kathy (John) Rapiejko of Durango; Debbie (Mike) Elm of Montrose and Robert (Kathy) Parcell of Durango as well as 3 Grandchildren: Taylor Elm, Maggie (Elm) Brown, and Elyse Parcell and 3 Great Grandchildren.

Celebration of Life Services are planned for Thursday, August 29, 2019 at 10:00am at Montrose Christian Church. Burial will follow at Grand View Cemetery.

In lieu of flowers, donations may be made to the Volunteers of America, Senior Community Care PACE of Montrose or any charity of your choice.

The family wishes to extend their heartfelt gratitude to the entire staff at the Montrose Senior Community Care Center for the excellent care and social enrichment they provided Dad. We are MOST especially grateful to the dedicated and compassionate Pace Nurses and teams of Home Health Care Givers who visited Dad daily. They enabled Dad to stay in his home, as he wished. Angels do indeed walk among us!

A very special Thank You to Virgil and Autumn Plume for their friendship and the many kindnesses they extended to Dad over the years. Also, our deep gratitude to prior health care givers: Jamie Zarkis, R.N., Terri Farmer and Chris Etchart.