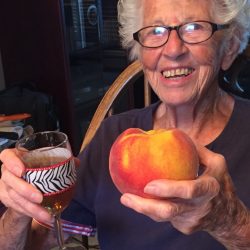 Veronica Miller, 92, of Montrose, CO, entered peacefully through Heaven’s gates on August 21, 2019.  Veronica was born October 6, 1926 in Ruthven, IA to Elmer and Hattie Meyer.  She was the 5th of 11 children who were raised on a dairy farm in Milford, IA.  She often told stories of delivering milk in a horse drawn wagon.  She married her husband Norvan on November 30, 1946 in National City, CA where he was stationed in the Navy.  They had 3 children Marilyn and twins, Konnie and Kevin.  Norvan and Veronica owned and operated the H Street Nursery School in Chula Vista, CA.  Later, she worked as a bookkeeper in a medical office until her retirement.  She moved to Montrose, CO in 2004 and enjoyed volunteering for the senior center where she met many wonderful people.

She was preceded in death by her parents, her husband, 6 sisters and 1 brother.  She is survived by her daughters Marilyn Mason, Konnie Miller and son Kevin Miller (Wendy) all of Montrose, CO.  Other surviving family members include 3 grandchildren, and 2 great-grandchildren.

Arrangements are under the care and direction of Crippin Funeral Home.