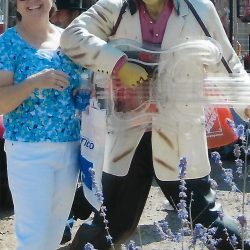 A Celebration of Life event will be held at the Bridges Golf Club on Saturday, March 18th starting at 11:00 a.m. The family requests you bring a small note with special thoughts or cherished memories of Gayle to be shared. Crippin Funeral Home is assisting the family with arrangements.

Verna Gayle Alvarado, 66, passed away peacefully at her home February 25, 2017 in Montrose, Colorado. She was the sixth child of Ova and Hazel (Stonestreet) Faust. She was born August 30, 1950 in Needles, California. She attended Needles schools and graduated from Needles High School in 1969.

In 1976 she met her future husband Frank in Laughlin, Nevada just across the river from Bullhead City, Arizona. The moved to Craig, Colorado when Frank acquired a job with Colorado Ute Electric Association to help start up the Craig Power Plant. After 10 years they once again moved to Nucla, Colorado for the start up of the Nucla Power Plant. Upon Frank’s retirement, they moved to Montrose, Colorado.

Her years in Needles were filled with happiness and friends. Her mother, Hazel, was widowed before Gayle was 5. Gayle was greatly influenced by her mother in acceptance of people and developing a tremendous work ethic. She had friends across all ethnic backgrounds. Her special friend Linda from childhood still endures today. She often talked fondly of the Kenna’s (Patsy and Bernadette), Marilyn and man more in and out of the projects. And not to forget, the Northside whistle and CAW.

While in Craig, Gayle had jobs including being a waitress at the Golden Cavey, working cement on the construction of the Holiday Inn, construction with Pulte Homes, Speed surveys for the Colorado Highway Patrol, and finally with Crises Intervention working with troubled teenagers. Recreation activities included fishing the Yampa, backpacking in the Mount Zirkel Wilderness, Skiing in Steamboat, and camping whenever possible. Many happy times were shared with the Alvarado and Quintana families, especially at the Stockmen’s Café in Montrose.

While in Nucla, Gayle was employed by the city at the Librarian, a one-person position, handling all aspects of the library for 15 years. She loved this job and developed many friendships with patrons and their children. Gayle was involved with the community in many aspects. Special events for the library and town were fun for her. She truly loved her Aunts and Uncles and cousins east of the Mississippi.

After moving to Montrose, Gayle was hired by the Montrose Regional Library District as its Interlibrary Loan Specialist, a position she held until her retirement in 2015. Gayle received a special award for her dedicated work in improving this department and increasing the volume of materials loaned and received from libraries all around the country. Gayle was a talented crafter and made many close friends through the years crafting together. Unfortunately, Gayle was diagnosed with her first bout of cancer shortly after arriving in Montrose. Except for a year being cancer free, she continued getting treatments including operations, chemo and radiation. Throughout this ordeal, she was upbeat, positive and brave in her approach of coping. She was always more concerned with her friends lives telling them not to worry about her and that everything would be alright.

The family thanks all the efforts of Dr. Choon-Kee Lee and his amazing staff of professionals and nurses in the care of Gayle through the years at the San Juan Cancer Center. Also, the doctors and staff at The University of Colorado Anschutz Cancer Center and The University of California San Francisco Helen Diller Family Comprehensive Cancer Center of their care, treatment and diagnosis in prolonging Gayle’s life so she could enjoy her family and friends. Memorial contributions may be made to the San Juan Cancer Center in Gayle’s name at 600 South 5th Street, Montrose, CO 81401.

A Celebration of Life event will be held at the Bridges Golf Club on Saturday, March 18th starting at 11:00 a.m. The family requests you bring a small note with special thoughts or cherished memories of Gayle to be shared. Crippin Funeral Home is assisting the family with arrangements.