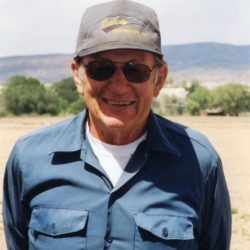 Lifelong Montrose resident Tony Appelhanz passed away peacefully at home on Thursday, April 8, 2021, at the age of 90. Tony was born in Shavano Valley, May 31, 1930 to John and Mary (Unrein) Appelhanz. He grew up in the Olathe and Montrose area. Tony attended school in Olathe until his senior year of high school, when the family moved to the farm at Riverside. He graduated from Montrose High School in 1948, but was considered a part of both graduating classes. Tony joined the Colorado National Guard in 1948 and was honorably discharged in 1957. Along with his dad and brothers, Tony farmed and ranched. Tony was a member of the Holly Sugar Beet Board when the sugar beets were raised in the valley. The family also raised beer barley which was used to make Coors Beer. Cattle were added to the business with the family raising mainly Herefords. Throughout his lifetime Tony saw the advancement in agriculture. As a child he used a team of horses to work the fields and saw the development of more mechanized equipment as the years went by. Towards the end of his farming career he started Base Products and began selling gravel in the area in 1995. He could be found in the gravel pit running equipment up until his retirement.

Music was a big part of Tony’s life. He played the accordion, trumpet, piano and drums. He was a member of The Key Notes, a jazz band that played across the Western Slope, in which he played the drums. Many afternoons were spent with Tony playing his favorite jazz tunes on the piano.

On April 30, 1960, Tony married his wife of 60 years Marion Myers. They had four children Matt, Amy, Tracy and Laura. As a family they worked the farm and ranch from irrigating, pulling weeds, moving cows, and working on the farm equipment. He was also a large part of the 4-H Community as all three daughters were members. He was always willing to lend a helping hand and treated the other kids like his own.

Tony also enjoyed spending time with his thirteen grandkids. From gardening, raising livestock, to music Tony was always willing to give advice. He also shared many stories of his life with them which always included a life lesson.

Tony’s family would like to thank all the special people who helped take care of him: Missy, Maria, Jennifer, Sam, Racheal, Rebekah, and Rose.

Tony’s family would like to thank all the special people who helped take care of him: Missy, Maria, Jennifer, Sam, Racheal, Rebekah, and Rose.  In lieu of flowers please donate in Tony’s Memory to HopeWest Hospice 725 S 4th Montrose, CO 81401.