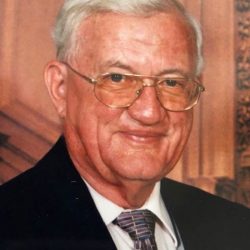 One of the founding members of the Black Canyon Square Dancers.

Tom was born in 1934 and grew up in Hoehne Colorado.  Tom met the love of his life in college in Fort Collins, and married Dorothy Prieskorn on June 11, 1955.

Tom and Dorothy loved square dancing, a hobby they first started in college. They were founding members of the Black Canyon Square Dancers, one of the oldest dance clubs in Colorado.  Attending dances took them to 48 states.    Tom was an avid gardener and filled his pantry with home-grown canned vegetables.  He and Dorothy were active members of St. Mary’s Catholic Church and he was as a member of the Elks Club.  Tom loved living among the natural wonders of western Colorado and could be found skiing, hiking, camping and four-wheeling throughout his years here.  He also had a deep curiosity for the wider world and traveled with Dorothy to Japan, China, Bolivia, Peru, the Caribbean, and Mexico.

Tom was a Montrose resident since 1974, and was the field manager for the Tuxedo Corn Company for 25 years and prior to that he served for 35 years as an area agronomist with CSU’s Cooperative Extension Service.  His career began with 2 initial years in Montrose in 1957, followed by 10 years in Springfield, 4 years in Grand Junction, then he moved back to Montrose.  Tom received a BS in Agronomy in 1956 and later, a Masters in Adult Education, both from CSU.  In his career in Agronomy, he developed a strong bond with the local farming community, forming friendships that lasted well into his retirement.  He developed a successful general agronomy program for the Tri-River Area Extension office, and was involved in several commercial vegetable testing programs in the Uncompahgre Valley.

Tom is survived by his wife Dorothy of Montrose; children (spouses) Debbie (Kim) Cummins of Loveland, Cathy (Doyle) Gallegos of Herndon, Virginia, Tim (Mary) Doherty of Arvada, Jim (Laura) Doherty of Basel, Switzerland, Christy (Troy) Doherty of Montrose: 13 grandchildren and 14 great-grandchildren.  He was deeply loved and will be truly missed.

A celebration of life service will be announced at a later date.