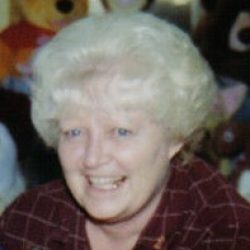 Shirley Appelhanz was born on February 20, 1944 to wonderful parents Edward Schmalz (farmer) and Mary (Tripler) Schmalz (homemaker). Shirley was an ideal daughter and sister to her parents and siblings and lived with them in Olathe until she was 22. On November 19, 1966 she married the one and only love of her life, Edward Appelhanz, and moved to Montrose. They have been happily married for almost 53 years. As Edward farmed and ranched, Shirley created the perfect home life as a full-time homemaker for him and the six children they had together. As time went by, her life became even more blessed when her four grandchildren were born. She was also a mother figure to many nephews and nieces. She loved animals and her family pets were just like family to her. Dogs Jovi and Dusty, cat Butterball, and a grand-dog Slip. Shirley spent her entire life putting her family and loved ones first. She was an amazingly strong, completely selfless, and unequalled mother and wife. Shirley’s faith in God was also of the utmost importance in her life. She was born and stayed a Traditional Catholic her entire life. She had a strong and loving devotion to God, the Blessed Virgin Mary, and all the Saints, especially St. Anthony and St. Joseph. She was preceded in death by both parents, her brother Ned Schmalz, infant brother James, sister Linda who also died in infancy, and her beloved daughter-in-law Angela. She is survived by her husband Edward, her sons Kent (Julie), Randy, and Scott; daughters Suzanne, Jill, and Ann; brother Steve (Marilyn) Schmalz, sister Cathie (Andy) Gray, sister-in-law Terri Schmalz; grandchildren Joseph, Dominic, Benedict, and Marianne, and many nephews and nieces. There will be a rosary on Tuesday, August 13 at 7:00 p.m. Her funeral is at 10:00 a.m. Wednesday, August 14. Both are at Crippin Funeral Home in Montrose.