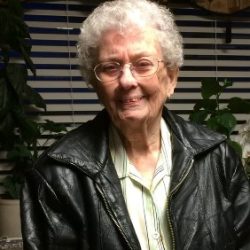 After many years of battling Alzheimer’s, Shirley Ann Chitwood, with family surrounding her, was taken home by Our Lord and Father, on December 22, 2021.

Shirley was born to Elza and Rosanna Benson on June 1, 1930.  While attending the Minnesota Bible College, she fell hopelessly in love with Stanley Ray Chitwood while ice skating at a pond near the Christian College.  They were wed on May 27th, 1950.  They spent a lot of time traveling, as Stanley was a Pastor, and his position took them to many places throughout the United States.  They had two children – John and Jill.  Shirley was a most loving and caring wife, mother, grandmother, and great Grandmother.

Shirley loved the holidays and getting just the right things for their home and family.  One of her favorite memories was when she was preparing her children for Halloween.  She had accidentally put John’s long johns in with red clothes and it ended up being red.  This gave her the idea to have John be a devil and Jill the angel.  She also loved the color blue and would always have blue Christmas tree decorations out.  Shirley also loved collecting miniature antique axes and displayed them in many shadow boxes for all to see.

One of Shirley’s hobbies was painting.  She was a talented artist when it came to nature scenes that were of memorable importance to her.  She also was an avid quilt maker.  She added the remaining pieces to a 5th Generation family quilt that was handed down to her from her ancestors.  Shirley was also an accomplished singer.  While attending College the group was called “The Shirley Sisters” as all were named Shirley.  The “Shirley Sisters” would sing at various venues throughout the West Coast and Midwest.

She was preceded in death by her sisters Betty and Christina, brother Ronny, as well as husband Pastor Stanley Chitwood and her very favorite son-in-law David Franck, who passed 11 days prior to her.  She will be sadly missed by her family, her church and many friends.