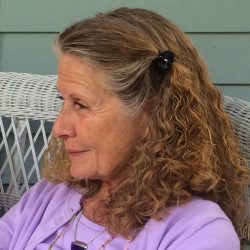 Born to William “Bill” Butterfield and Phyllis (Krill) Butterfield in Montrose, CO, Sheryl grew up in Olathe and graduated from Olathe High School in 1968. After high school, Sheryl made

her way to Gunnison where she attended Western State College and met her future husband, Harvey Starbuck. They married in 1972 and, in 1973, welcomed their first child Natasha. For the next seven years Sheryl worked for the post office in Carbondale. Her work for the post office continued in 1980 when they moved to Montrose and welcomed their second child, Caleb. While in Montrose, Sheryl and Harvey adopted two children from Seoul, Korea. Sara Choi and James Choi joined the family in March of 1986. In 1995, Sheryl’s next adventure began as she

and Harvey opened the Mountain Valley Coffeeshop on Main Street. She eventually made the decision to sell the business and, at the age of 45, went back to college. Over the course of the next four years she completed both her undergraduate at Mesa State College and her masters degree in Community Counseling at Adams State College. As a counselor, she spent the remainder of her career working with children at Hilltop in Montrose (formerly Tandem Families) and in schools on military bases, domestic and abroad. In her role on military bases, Sheryl worked in Germany and England but most enjoyed her time in Okinawa, Japan.

Sheryl loved spending time in the sunshine, tending to her flower garden and her bee-hives,

listening to Willie Nelson, morning walks with friends, and most of all, being with her family. “Grammy” Sheryl adored her children and grandchildren, crafting, fly-fishing, and creating outrageous costume challenges and obstacle courses for the annual family camping trips were among the many ways she shared her love for life with her family. She also enjoyed traveling. Santa Fe, Ouray, and the Big Cimarron were among her favorite places to visit.

Sheryl is preceded in death by father, Bill (2014). She is survived by mother, Phyllis (Bill)

In honoring Sheryl’s wishes, cremation has taken place and there will not be a service. The

family will hold a celebration of her life at a later date.

The family has asked that, in lieu of flowers, that everyone that knew her takes a moment to remember their time with Sheryl and give someone they love a hug and tell them they love them.