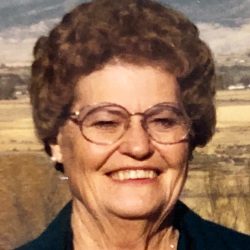 Visitation 10-11 am Christ’s Church of the Valley

Ruth Stone passed away in Montrose on May 21, 2019.  She was born on July 11, 1926 in Borger, TX to Bob and Belle Shelly.  Her parents homesteaded a ranch south of La Junta, Colorado and her dad quarried the rocks that he used to build their home.  She was one of five children in the family including three sisters: Vivian (Berry), Carol (Ray), and Zelma (Krohn) and one brother, Joe Shelly.  The family was very close and was part of a very large and loving extended family.

Ruth worked on B-19 airplanes at the La Junta Air Base in 1941 and 1942, a job she loved and was proud to do in support of her country during World War II.

Pete and Ruth made hunting trips from La Junta to Courthouse Rock south of Montrose with other family members.  After one such trip, they decided to move to Montrose and they established South Side Salvage south of town in 1949.  They operated the wrecking yard together until December of 1977 when they sold it because of Pete’s poor health. Pete passed away in 1978 and Ruth found herself with time to pursue new interests.

One such interest was as a hypnotist.  She was trained and had her own clinic in Montrose until she married Gene Stone on March 25, 1985.  Together, they enjoyed the mountains, dancing, their cattle, and many other outside activities.  They were both early risers and enjoyed 5:00am coffee with a group of special friends at Denny’s Restaurant.

She is survived by her husband, Gene, her sister and best friend, Carol Ray, her children, Laura, Tom and Tobe, her stepchildren, Russell (Bonnie) Stone and  Linda (Ron) Davis of Montrose and Gary (Stephanie) Stone of Colorado Springs, many grandchildren and many nieces and nephews that she loved very much.

Visitation 10-11 am Christ’s Church of the Valley