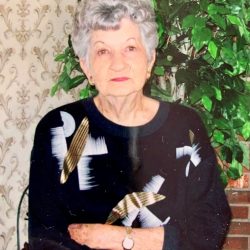 She was a devout Christian who trusted and believed that God would always provide.

Ruth M. Richards, a life-long resident of Colorado, passed away on Thursday, June 24th, 2021, at her home in Montrose, Colorado, surrounded by her loving family.  Born on February 8, 1916, in Olathe, Colorado to John and Pearl (Crouse) Anders, she passed away at the age of 105.

Ruth was the third of six children, and she was the first of her siblings to be born in Colorado.  Ruth grew up in Olathe, where she attended Stone School from first through eighth grade and then attended Olathe High School.  While in school, she met Ed Richards and on December 17, 1934, the couple were married in Delta.  Ruth and Ed moved to Montrose where Ed worked for Uncompahgre Valley Water Users.  The only time that Ruth lived outside of Colorado was when her husband Ed worked for Rio Grande Motor Ways and the couple located to Price, Utah for three months before returning to Colorado.  The couple eventually returned to Montrose where Ruth worked at Reeds Variety Store, Allisons Clothing Store, Ideal Food Market and other places throughout the years.

Ruth was a child of the great depression, which had a profound effect on her entire life.  She was a devout Christian who trusted and believed that God would always provide.  She attended the Assembly of God Church and the Christian Church until her health no longer allowed.  Ruth had many enjoyments in her life such as, quilting, crocheting, and sewing; however, her greatest joy came from spending time with her family.  She will be greatly missed by her family and friends.

She was preceded in death by her parents; her husband of 50 years Ed Richards; a daughter, Marylin Kay; a sister Beulah Carrico and her husband Berlan; brothers, Gene Anders and his wife Opal; Bud Anders and his wife Phyllis; a sister-in-law, Bonnie Anders and a brother Lowell Anders; Son-in-laws, Jerry Holman and Richard Holzmeister; Brothers and sisters-in-law, Hazel and Hank Schlaugher, Mildred and Carl Button, and Phyllis and Jimmy Carter; and a great grandson, Javone Cowan.

Friends are invited to attend the funeral service on July 19, 2021, at 10:00 am at Crippin Funeral Home, located at 802 E. Main Street, Montrose with Chaplain Annie Grogan officiating.  Interment will follow at Valley Lawn Cemetery.  Arrangements are under the direction of Crippin Funeral Home.

Remembrances may be made in Ruth’s name to HopeWest Hospice, 725 S 4th Street Montrose, CO 81401