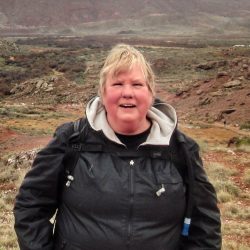 Memorial services will be held at a later date.

Ruth Emily (Lever) Courville, 71, died on Christmas Day in Montrose, Colorado. She was the widow of Jeffrey Courville, who preceded her in death in 2003 after 33 years of marriage.

Born in Worcester, Massachusetts on May 17, 1949, Ruth was the daughter of John E Lever and Elizabeth A (Cook) Lever. Raised in Shrewsbury, she attended Shrewsbury public schools. Ruth also studied interior design at Chamberlain Junior College in Boston. She spent many years working in commercial greenhouses, and later operated a delivery company with her husband, Jeffrey.

Ruth moved from Shrewsbury to Delta, Colorado in 2008 to be closer to her three grandchildren: Joshua, Luke and Juliana Stagner. She will be fondly remembered for hosting large family gatherings, for her love of gardening, her affection for animals and her caring, straightforward nature.

Memorial services will be held at a later date. Donations in Ruth’s memory can be made to Hope West Hospice.