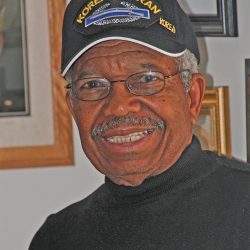 Memorial Services are currently scheduled for 11:30 am on May 8th at Crippin’s.

Ron was the first of three children born to Lula Johnson and Edward  Buddy  Corley, in 1933, during the heart of the depression. His siblings Dickie and Sylvia soon followed. Ron was the leader of their little group that lived in the Carsquare Village Section.

Ronald was a hard worker all of his life. From the age of 12 he delivered ice to homes on the upper floors in St. Louis with the neighborhood ice man. In 1952 at 19 he was drafted into the U S Army and served in the Korean War from 1952-1954, as part of the 945 Guard Unit and the 9055th Infantry division where he was part of the Grave Detail.  Ron was discharged at Ft. Carson, CO in 1954 and returned home to St. Louis to find that his job at the American Core Foundry no longer existed, He subsequently went to California to live with his Uncle Al (a long-time merchant seaman), who said that work was plentiful in the Bay Area. After a few months Ron decided to try Southern California and came to Los Angeles.

Ron met Joyce Terry in 1957 when he was introduced to her by her mother who thought he was the nicest young man she had met. He ate all his meals at her cafe and was quickly a welcome regular there. On April 5, 1959 Ron and Joyce were married in L A. CA. in a large family wedding ceremony that caused Ron and the best man to drive around the block at least 50 times that morning according to Joyce’s brothers Chuck and Elliot. Luckily he decided not to take off!

After disliking school as a child, adult Ron was always open to working and learning new skills. Ron had a lot of them. He worked for the City of Los Angeles, and he was a lineman for the Los Angeles Department of Water & Power for 19 years. Later he was the Painting Supervisor for the Pomona Unified School District, and after that a licensed Locksmith!  His greatest joy came when he started Corley Construction Company and began refurbishing old houses for the Federal Government under HUD.  For twenty years he reveled in modifying and correcting old homes and apartments and was well known all over the Southern California area. Ron’s greatest achievement in life as far as he was concerned was his participation and leadership in building a large, beautiful, community based church in Monrovia California, All Nations SDA Church.  Ronald felt so privileged to be a part of a true “Miracle in Monrovia.”

Ron and Joyce were blessed to travel extensively and enjoyed seeing all 50 states as well as Canada, Mexico, Europe and 15 islands in the Caribbean.      Remembering the hardship of being raised by a single mom, Ron always dedicated a portion of his time to working with youth.  He was a Pathfinder leader at church and had one of the first Teen Post in South Central Los Angeles.

Ron’s passions after retiring were in helping others.  After moving to Montrose he drove for 13 years for the Sharing Ministries Food Bank and was happy to be on call for any emergency needs they had.  He belonged to VFW Post 4663, and The Welcome Home Alliance for Veterans where he enjoyed weekly PTSD meetings and support, as well as warm fellowship with a host of other Veterans and staff.

Ron is survived by his wife Joyce and six children, Ronald Corley, Jr, Anne Corley, Jeffrey Corley (Wendy), Wendy ‘Spirit” Corley, Ronda Corley, and Christina Corley. He had 9 grandchildren and many beloved cousins, nieces and nephews too numerous to count, as well as many other relatives who loved him dearly. Ron was truly one of a kind, and a gift to his family and his fellow man. He often came on like he was hard as nails, but people who knew him know that he was soft as butter! He was not a perfect man by any means, but Joyce has always said, “He was the perfect husband for Joyce Terry Corley!“ RIP Ron, you earned every minute…..

Memorial Services are currently scheduled for 11:30 am on May 8th at Crippin’s.

The family respectfully requests that in lieu of flowers, donations be made in Ronald’s name to the Sharing Ministries Food Bank at 49 North 1st Street, Montrose, CO 81401 (970)240-8385, and/or the Welcome Home Alliance for Veterans (WHAFV) at 4 Hillcrest Parkway, Montrose, CO 81401.