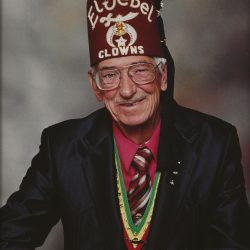 Ronald E. O’Hair age 80 passed away on December 10, 2019 at home surrounded by his loving wife Donna O’Hair of 51 years. Ron was born March 4,1939 in Telluride, Co. to Albert G. O’Hair and Leona Inman. Ron joined the Air Force in 1956. He is survived by his loving wife Doni of Montrose, son Michael O’Hair, daughter Sheryl Chaloupka of Texas. Survived by many nieces and nephews, several grandchildren and great grandchildren.  Ron and Doni moved to Montrose after getting married in Amarillo in 1968. He was a life-long member of the Elks, Past Master of Gunnison Valley Masonic Lodge, Western Colorado Shrine club as a Shrine clown known as “Sparky”, also in American Legion and Past Patron of Order of Eastern Star in Gunnison. Ron was selected Shriner of the year in 2004, an Honor he was proud of.

Ron loved outdoors, traveling, hunting and golf along with his family. He loved making people laugh especially children. Ron took pride in everything he did and all his accomplishments from designing and building several homes for him and Doni, his wood working which he referred to as “making saw dust”. Ron retired as a State Electrical Inspector in 1994.

He was preceded in death by daughter Leona O’Hair.