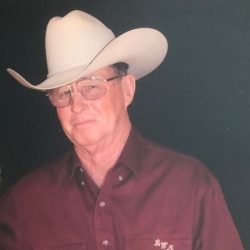 Memorial services were held Saturday September 21, 2019 at the First Baptist Church in Nucla with Pastor David Smith officiating. Arrangements were made by Crippin Funeral Home of Montrose, CO.

Bob was born in Brownfield, TX to Ettie Aleene Jackson and Solomon Robert McLeroy on February 28, 1937.  He attended high school in Nucla, but graduated from Dove Creek High School.  He married the love of his life Margaret Andra Nelson “Peggy”, on June 7th, 1963 in Dove Creek, CO.  He worked as a miner for most his adult life mining hard rock, uranium and coal.  He was a U.S. Army veteran and was awarded the Expert Infantryman Badge among other awards and played football for the army in Germany.  He was a member of the Rodeo Cowboys Association back in the day riding bareback broncs and bulls. Later he competed in the Old Timers Rodeo Association riding bulls. Bob over the years became an avid team roper competing in many different team roping events. Locally he was involved in the Tabeguache Trail Riders and the Norwood Roping Club for many years. Bob’s first love however, was working with kids teaching them to ride rough stock, ride horses and to rope, but also in the process he was teaching them about life and doing what’s right. Bob and Peggy traveled many miles judging high school, Little Britches, and junior rodeos because they loved helping the kids and it kept them young.

Bob is preceded in death by his wife of 54 years Peggy McLeroy, Brother Jim McLeroy, and both parents.

The family of Bob McLeroy wishes to extend our sincere thanks to the Nucla, Naturita, and Norwood communities for all their help and support in this trying time. We would also like to thank the physicians and nurses at St. Mary’s Hospital for their help and kindness, as well as the staff at Larchwood. Thank you all.