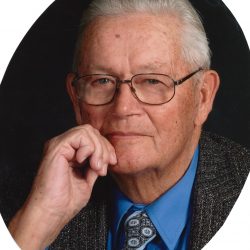 There will be a graveside service @ 1pm on November 19th at Valley Lawn Cemetery. There will be a meal and fellowship to follow at the Holiday Inn in Montrose.

Robert Eugene Haynes died at his home surrounded by his family on November 14th, 2018.

He was born to Velva May Akin and Leon William Haynes on March 4th of 1925 in Grand Junction, Colorado

His early childhood was spent in Cedaredge with his parents and five brothers hiking Grand Mesa to fish and riding a saddle horse to school. He spent his fifth, sixth, and seventh grade years at John Brown Academy in Arkansas and after that returned to Cedaredge to live with a kind Christian woman, Mary Dinsmore, who took him into her home.

He told of Mary taking him by wagon to Delta to trade for supplies and get water and how She gave the children a nickle to see a show at the Egyptian Theater.

He left Cedaredge High School a semester short of graduating to join the Navy in February 1943.

He fought in WW2 on the USS Liscome Bay. Nine months after enlisting his ship was sunk by a Japanese submarine. 642 went down with the ship while he and 271 others survived. He was severely wounded and later awarded the Purple Heart by Admiral Nimitz, Commander in Chief of the Pacific Fleet.

After spending nine months recovering in two different military hospitals, he was honorably discharged on time served. Civilian life just wasn’t for Bob, so after two months he re-enlisted as a Marine and served 17 years, retiring from the Military in 1964.

After his Military career Bob worked for the US Postal Service until he fully retired in 1984.

During his Military career, while on leave, he came to visit a friend in Montrose, Colorado. His friend fixed him up on a date with, who would become, the love of his life, Barbara Nell Newberry. They would marry on July 6th, 1952. Together they raised 4 boys, Matt, Brian, Brent, and Todd. For that they were rewarded with 7 grandchildren and 6 great grandchildren. Family was always a top priority in Bob’s life.

He was a gentleman, a patriot, and an avid outdoorsman. He enjoyed his retirement traveling and hunting He especially looked forward to his annual fishing trip to Taylor Reservoir, where his brother, sons, and grandsons would gather to fish, tell stories, and make memories.

Bob was a faithful man of God and we are blessed to know that he is with his Lord and Savior.

He is proceeded in death by: Both parents, brothers Bill and Chuck, his beautiful wife Barbara Nell, and his granddaughter Caitlyn Nell.

There will be a graveside service @ 1pm on November 19th at Valley Lawn Cemetery. There will be a meal and fellowship to follow at the Holiday Inn in Montrose.