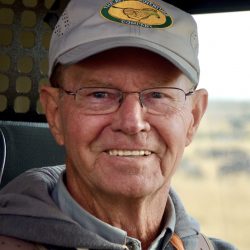 Celebration of life services for both Bob and Sue are tentatively planned for the weekend of June 4th, their 55th wedding anniversary when it is safe to gather again.  The family appreciates all the outpouring of love and support since both Bob and Sue’s passing.

Robert Lloyd “Bob” Dix, 76, from Montrose, CO went home to be with the Lord on Friday, February 12, 2021 after a tragic and hard-fought battle with COVID.  He was born on January 4, 1945 in Paonia, Colorado to Robert and Alice Dix. He had one younger brother, Raymond.  Bob married his high school sweetheart, Sue Charlton, on June 4, 1966, and they lived in Gunnison while Bob got his teaching degree.  In 1968, they moved to Montrose and Bob started teaching science and coaching at Columbine Junior High.  Soon thereafter, they had two children,

Shelly and Greg.  When the kids were young, almost every weekend you would find the Dix’s camping, fishing and enjoying the outdoors.  In 1976, Bob and Sue bought Raleigh’s Paint and Wallpaper Store where they worked together side-by-side for 41 years until they retired 3 years ago.

Bob was a family man who above all else worked hard and sacrificed to give his family the best of himself.  He was devoted to investing in his family – being present and involved with them throughout his entire life.  He spent most of his free time coaching his kids in all of their sports, cheering them on from the stands, baiting their hooks, and teaching them to love the outdoors.  He just simply loved helping them in any way he could.  Bob loved the “Colorado lifestyle”.  He enjoyed fishing, hunting, camping and four-wheeling with Sue and all of their lifelong friends.  With Sue’s passing just 8 short weeks ago, it was hard to imagine life for Bob without his best friend.  They did everything together and truly were soul mates.  They showed all of us what love, sacrifice, commitment and selflessness looked like as husband and wife, mom and dad, friend and neighbor.  Bob’s family takes great comfort knowing that the two of them were reunited and able to celebrate Valentine’s Day together.

Bob always loved gardening and since retiring thoroughly enjoyed spending time in his yard growing a bountiful garden to enjoy and to share with friends and neighbors.  You would be hard pressed to find a more manicured or beautiful yard than his.  If you couldn’t find Bob working in his yard, you’d probably find him fishing with his brother Ray, four-wheeling on the Plateau, taking long walks with Sue and on some occasions, if Sue was convincing enough, he’d be playing pickleball with “the ladies”.  Bob loved to go for drives with Sue, play games with friends and find any excuse to see his grandkids, Courtney and Braden whom he nicknamed “Girlfriend” and “Best Bud”.  He was so proud of both of them and enjoyed nothing more than to cheer them on while they played sports and tell them how much he loved them.  He also didn’t mind beating them from time to time in a game of Mexican Train or Shanghai Rum.  Bob always had a smile on his face, and it was never bigger than when he was with the two of them.

Bob is survived by his daughter and son-in-law, Shelly and David Brown of Richmond, Texas; his son, daughter-in-law and grandchildren, Greg, Vicky, Courtney and Braden Dix of Fort Collins; his brother Ray Dix of Montrose; and numerous nieces and nephews.  Bob was proceeded in death by his beloved wife Sue, and his father and mother, Robert and Alice Dix.

Celebration of life services for both Bob and Sue are tentatively planned for the weekend of June 4th, their 55th wedding anniversary when it is safe to gather again.  The family appreciates all the outpouring of love and support since both Bob and Sue’s passing.