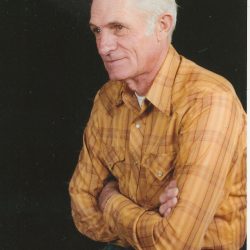 Robert Lyman Abbott was born September 1, 1934, in Ovid, Colorado to wheat farmers James Elmer and Violet Ellen Abbott. He was the youngest of four siblings, James jr., Donald and Jean Abbott. During his school years they moved to Northwestern Colorado and then eventually to Montrose county, where he went to school in Olathe. In high school he enjoyed being on the boxing team.

After graduation he became a core driller, working in several Western states until he was drafted by the Army, where he was stationed in occupied Germany and was a tank mechanic. When he fulfilled his military service he returned to drilling in Nevada.

During his return to Nevada he met and married the love of his life, Joan Hecker Powell, becoming father to three kids, Alan, Ella and Antone (Tony). After marriage, the family lived in Ely, Tonopah and Yerington Nevada, then moved to the family farm in Olathe, Colorado.

Bob farmed and worked at Delta Sand and Gravel, before buying out Ouray Concrete and moving the operation to Ridgway, Colorado, where he started Abbott Ready Mix. Bob and Joan ran the business for over 25 years before retiring to Montrose, Colorado.

He enjoyed several hobbies such as photography, fishing and roaming the mountains of Western Colorado.

He went to be with Jesus, November 4th, 2020, He was preceded in death by his parents, siblings and His beloved wife, Joan. He is survived by his three children, eleven grandchildren and fourteen and a half great grandchildren.