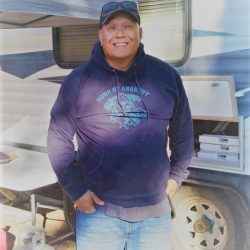 Rick passed away Saturday, November 27th at St. Mary’s Hospital in Grand Junction. He was on August 2nd, 1973, to Terry and Rebecca LaPena in Montrose. He was a lifelong resident of Montrose, except the years he was in the military. He graduated from Montrose High School in 1991.Right after high school he joined the United States Army and served and was honorably discharged. later went on to graduate with an associate degree from Colorado Mesa University. He currently worked as a fraud investigator for Montrose County. He previously was employed as a Montrose County Sheriff’s deputy and a Montrose police officer. His two daughters and four grandchildren were his greatest joys. He was truly a supportive father who always did the best for his girls. He was a great man who loved to laugh and whose smile lit up the room. He was an amazing friend to many.more  He was currently engaged to Tanya Hawk who has a daughter Markie.

Preceding him in death are his parents, Terry and Rebecca Lapena. Surviving are his daughters Shalynn (Matt) Maestas and granddaughter Adelay Maestas of Grand Junction, Hannah ( Zach)  Francis and granddaughters Jamie, Felicity, and Sophia Francis of Delta. His sister Gail LaPena and Two nieces Cyra and Mckayla LaPena of Denver. His brother Lenny of Texas, his aunt Claudia of California.