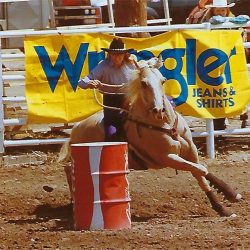 A Graveside Service will be held on Monday, March 27, 2017 at 1:00 P.M. at The Gunnison Cemetery in Gunnison, Colorado. Crippin Funeral Home & Crematory in Montrose, and Gunnison Funeral Service are assisting the family.

Phyllis “Penny” Jean Eilebrecht Kysar, was born in Gunnison, CO on February 25th, 1948, to Phillip and Patricia (King) Eilebrecht. She grew up on the ranch and graduated from Gunnison High School in 1966. A year later she married Steve Christensen and they had two children together. They move to Olathe, Colorado in 1977 at which time she started working for Tri-State Generation and Transmission. She continued working there until 2004.

Penny was an avid horsewoman her entire life. Her life revolved around her horses and she would continue to compete in barrel racing until her health no longer allowed. She also loved to watch her children compete .

Her husband, Gilbert Kysar, her horse “Yeller” and favorite dog “Rooster” would share her closest company. She was born a tough cowgirl, lived the same and would remain so until her death on Friday March 17th, 2017.

She was preceded in death by her parents Phillip and Patricia Eilbrecht, and her first husband Steve n Christensen.

Penny is survived by her husband Gib Kysar, two children and their families, Eric Christensen of Delta, CO and Jan and Bill Brown of North Platte Nebraska. One sister Debra Stegar of Montrose, Colorado. She is also survived by her stepchildren and their families, Deanna and Mike Cooper of Lake City, CO, Joanna Kysar of Springtown, TX, Barbara and Rick Kaiser of Vero Beach, FL and Alek and Margaret Ipatenco of Aurora, CO.