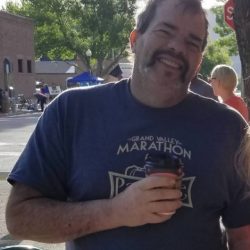 Peter may be gone but his legacy will go on through all of those who loved him and who truly knew how amazing of a man he was.

Peter Doyle passed on November 20, 2020 from Leukemia at the age of 54, he was born September 30, 1966. He is preceded in death by his mother Mary, his father Arthur and his brother Paul. Peter’s younger self  was always a bit of a wild child, but he always helped out when someone was in need. He is survived by his wife Julia, his special daughters Sara, Ashley, and Leslee (Heath Berggren), his brothers Lonnie (Patricia) Steven, and his sister Tina (Aaron), his eight(8) grandchildren and his three(3) great grandsons his numerous nephews and nieces, his mother-in-law Vera Bustos, and Brother-in-law Robert (Robin) Hall. Peter enjoyed traveling and showing the people he cared about a good time and yummy food. He enjoyed cooking feasts for his family, and having everyone over. He was loved by everyone he met, and loved with his whole heart. Peter may be gone but his legacy will go on through all of those who loved him and who truly knew how amazing of a man he was.

“I remember one time he got one of our neighbors’ whole family Christmas presents, because it was a hard year for them so papa took them to get presents.”- HayleeRae

“I was papas’ little T-Rex”- Katharine

“I used to rub papas’ bald head and every time I’d say, “give me luck old man” and he’d always say, “get out of here boy”. – Markus

“God saw him getting tired and a cure was not to be. God put his arms around him and whispered come to me. With tears we watched him suffer and saw him slowly fade away. Although we love him dearly we could not make him stay. A golden heart stopped beating and hard working hands out to rest. Now god broke our heart only because he took the best angel.”- Desire

“Whenever i would go to my cousins house papa would tell me “if those girls get too crazy i’ll come beat them up and take you with me”.”- Roman