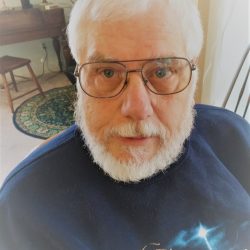 Pastor Samuel King Detwiler, 69, died January 29,2021 in Grand Junction, CO after a seven week battle with Covid 19.  Samuel was the husband of Dr. Floy Ditmars Detwiler, who was his constant Christian supporter and cherished companion.

Samuel was born in Phoenixville, PA to the late Samuel S. Detwiler and Dorothy King Detwiler. He graduated from Ottawa University, Ottawa KS and University of Missouri—Kansas City with a Master’s degree in Psychology. While working as a chemical dependency counselor, he felt the Lord urging him into Christian service. For the next 38 years he was a pastor at various churches throughout the US, being ordained a Church of the Brethren and American Baptist minister. In 1999 he was led to be pastor in Wenatchee, WA at the Brethren Baptist church. After 7 years he followed his calling to start Shalom Church to minister to the addicted and marginalized. The church started a drop-in day center, Power House, to minister to the homeless in Wenatchee.

He and his wife retired to Montrose, CO in Spring, 2019 to pursue their love of off-roading and camping in their beloved mountains. They attended Abundant Life Church and Samuel continued to reach out to the hurting and broken. He always showed Christian compassion for those in need.

A memorial service will be held at Abundant Life Church at a later, safer time.