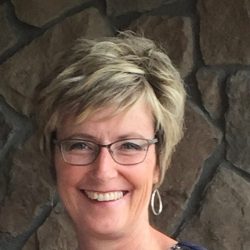 The celebration of her life will be on Sunday, September 1st, at 2:00 pm at the United Methodist Church in Montrose. A reception will follow in the church’s Baldridge Hall.

Nancy Louise Alex passed away peacefully at her home in Montrose on Tuesday, August 27th, 2019 after a four-year battle with esophageal cancer.

Nancy is survived by her husband Greg, daughter Audrey, an interior designer in Denver, daughter Janey, a sophomore at the University of Vermont, and son Sean, a senior at Montrose High School. She is also survived by her mother, Mary Moenkhaus, of Greeley, Colorado, and her father, Robert Moenkhaus, of Casper, Wyoming, sister Suzanne Hansen (Doug) of Montrose, sister Patty Pell (Scott) of Greeley, and six loving nieces and nephews.

Nancy was born on November 22, 1964 in Casper, Wyoming. She lived in Casper until she moved to Laramie to attend the University of Wyoming where she received her

Bachelor of Science Degree in Biology and a secondary education teaching certificate. She received her Master’s Degree from Adams State and her Ph.D. from the University of Denver, both in education.

Nancy’s greatest passions were her family and her career. She loved watching her children throughout the years play basketball and soccer and hated to miss any of their activities.  Nancy’s career as an educator spanned over three decades.  She started her career as a middle school teacher in Saratoga, Wyoming and continued at middle schools in Minturn and Edwards, Colorado. Nancy moved into school administration and became the principal at Red Hill Elementary School in Gypsum, Colorado.  She and her family moved to Montrose in 2008, and she became the principal at Centennial Middle School. In 2015, she became a professor of secondary education at Colorado Mesa University in Grand Junction and taught there until March of 2019. One of her lifelong goals was to impart her love of learning to others.

She will be greatly missed by her family, friends, and colleagues. The celebration of her life will be on Sunday, September 1st, at 2:00 pm at the United Methodist Church in Montrose. A reception will follow in the church’s Baldridge Hall.

Crippin Funeral Home of Montrose is assisting the family.