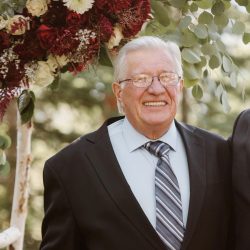 Monte was known for great sense of humor, his unmatched energy and strong work ethic.

On Thursday, April 1, 2021, Monte Wayne Haugland was called home at the age 75. The world lost a great husband, father, grandfather, uncle and brother.

Monte was born in New Rockford, North Dakota, on April 25, 1945 to Melvin and Inez Haugland.  Monte spent his youth working on the family farm near Mchenry, North Dakota. In 1968, he was drafted into the US Army and later became a sergeant with the 101st Airborne. In 1969, Monte received the purple heart after he was wounded during the battle of Hamburger Hill while serving in the Vietnam War.  After coming home, Monte attended the University of Wisconsin at River Falls, Wisconsin where he obtained a degree in Agricultural Engineering and met his future wife, Linda Verhulst (Haugland). Monte and Linda eventually settled in central Wisconsin where they raised four children. In the summer of 1999, Monte and Linda (along with the rest of the family) moved out to Montrose, Colorado where they built their home.

While in Colorado, Monte worked for the Bureau of Land Management providing maintenance to different sites throughout the western slope, a job he really enjoyed until his retirement 2011.

Monte was known for great sense of humor, his unmatched energy and strong work ethic.  He enjoyed working on his property, fixing things, being with his family, his dog Samson and donkey Homer.

The family is planning memorial service on June 12, 2021 at Colona Community Church for both Monte and Kurt Haugland.