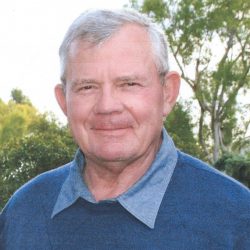 A memorial service will be held on Saturday, August 24 at 11:00 a.m. at First Presbyterian Church in Montrose. In lieu of flowers, donations can be made to Charis Prison Ministry of Delta (charisministrydelta.com) or Sonrise Mountain Ranch (sonrisemountainranch.org).

On Friday, August 16th, Michael Burnett McGee went home to be with the Lord surrounded by his family and grandchildren singing Amazing Grace. God made something that is often feared a beautiful and sacred time, filled with tears and gratitude. He had battled Parkinson’s disease for five years.

Mike was born on Dec. 1, 1938 to Hubert McGee, a Commander in the Coast Guard, and Jean Morrison McGee. Mike was the firstborn of the twins, his brother Jerry followed 45 minutes later.  They had two older brothers, Hubert “Jim” Jr., an Episcopal minister, and Edward, a Lieutenant JG Coast Guard pilot who died in 1957.   Mike and Jerry played and coached college football together and shared a kinship that was special to them from their first day to the last.   Jerry preceded Mike in death this past January.

Mike was married to Virginia “Ginger” Allison for 56 years.  They met at Duke while she was in nursing school and he swept her off her feet. They got married at Duke Chapel in 1963. They have four married children, daughter Kathy and her husband Tom from Dallas, son Mike Jr. and his wife Kristy from El Paso, son Matthew and his wife Chantal from Cimarron, and son Jerry and his wife Alana from Newport Beach. They have been blessed with 19 grandchildren and 4 great grandchildren!

It is impossible to reflect on the life of Mike McGee without mentioning athletics. For virtually his entire life he was alternatively a player, a coach, and a college athletics administrator. And in these roles he received innumerable accolades.

As a player at Duke University from 1956-1959, he became an All-American and was awarded the Outland Trophy as the nation’s best collegiate lineman. Following his senior season, he was selected the ACC Athlete of the Year, the only lineman to ever receive the award and subsequently a member of the College Football Hall of Fame. He played three seasons professionally for the St. Louis Cardinals and finished third in the voting for Rookie of the Year.

As a coach, he was an assistant at Wisconsin and Minnesota before becoming head coach at East Carolina and then his alma Mater, Duke University, where he coached for eight seasons including a ranking of 14th in the AP poll one season.

But this is only part of the story.

To know Mike McGee was to know someone who was uniquely determined in accomplishing the task at hand. He had a strength, a confidence, and a presence that could not be ignored. His reputation was that of a change agent who would lead in a manner similar to his playing days as an imposing offensive lineman. If something heavy needed to be moved, or someone which was occasionally the case, Mike would do it.

But like all the great offensive linemen of his time, he did these things in service of others. The people who he worked with throughout his career would initially cite his toughness but eventually speak of the positive influence and compassion he held for others. Ultimately, Mike McGee worked to live a life of service toward others. He participated in Charis Prison Ministry, whose mission is to transform lives by sharing the forgiveness of Jesus Christ, and actively supported Sonrise Mountain Ranch, a ministry in Cimarron, CO his son Matthew helped start.

Mike retired to Montrose from the University of South Carolina in 2005 to begin the final chapter of his life as a committed servant of the Lord, dedicated grandfather and aspiring owner of quarter horses.  And most significantly, he worked late in life in service of his wife, Ginger, repaying her for all the love and support she displayed throughout his illustrious career.  They had 56 amazing years together.

A memorial service will be held on Saturday, August 24 at 11:00 a.m. at First Presbyterian Church in Montrose. In lieu of flowers, donations can be made to Charis Prison Ministry of Delta (charisministrydelta.com) or Sonrise Mountain Ranch (sonrisemountainranch.org).