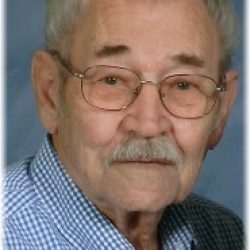 A Celebration of Merlyn’s life will be on Friday, April 7th at The Church of Jesus Christ of Latter-day Saints on Hillcrest and Stratford. A Viewing will be from 9:30 a.m. to 10:30 a.m. Funeral services conducted by Brother Daren Boyd will follow at 11:00 a.m. Interment will be at Valley Lawn Cemetery. Crippin Funeral Home is assisting the family with arrangements.

Merlyn Hale Smith was born July 12, 1932 to William Coleman Smith and Roetta Hale on the family farm in Grace, Idaho. He passed away March 31, 2017 in Montrose, Colorado.

He attended high school in Grace and graduated with honors as valedictorian in 1950. He moved to Pocatello, Idaho and worked for Garrett Freight Lines for a year and then worked for Union Pacific Railroad as a road fireman. In January 1953 he married Sharon McLanin and to that union one child, Randy was born. They were later divorced.

In June of 1954 Merlyn joined the United States Marine Corp where he spent “18 miserable weeks” at boot camp in San Diego, CA. He served time in Japan and Korea. Merlyn was proficient with rifles and pistols receiving an Expert Medal for Marksmanship with his rifle and .25 caliber pistol. While serving his country he attended Advanced Survey School enabling him to eventually make surveying his life’s work. He was honorably discharged in April of 1958 with the rank of Staff Sergeant. He was very proud of his years in the Marine Corps. After leaving the Marine Corps, he found employment with Pafford and Associates as a surveyor in Los Angeles, CA where he soon moved up to party chief. He was employed there from 1958 to 1970.

In 1960, he married Florence E. Mucklow Souza. She had two children from a previous marriage, a son Larry and a daughter Terry. Florence passed away in 1984 in Montrose, CO. In 1970, they moved from California to Ouray, Colorado where he founded Red Rock Surveying. In 1974, he and Bob Adams formed A&S Consultants in Montrose. The partnership was terminated in 1978. The business then became Del-Mont Consultants, Engineers and Surveyors. He sold the business in 1991 but remained as CEO until his retirement in 1996.

In April, 1985, he married a wonderful woman, Gloria Drobnick Passehl. She has two sons, Jeff and Kevin.
His enjoyments in life were hunting, fishing, numerous family reunions, and traveling many places in his R.V. with Gloria. He especially enjoyed his Alaskan trips with lifelong friends, Mark and Sandy Graveline. Mark, and often time his sons, Brett and Kevin, traveled from CA to CO each big game hunting season for close to 40 years without missing a season. Later in life, they enjoyed many happy hours reminiscing about their hunting adventures and the “big ones” that didn’t get away.

Merlyn would always be remembered for his honesty and integrity in both his personal and business dealings. Many nieces and nephews loved to visit their “favorite Uncle Smitty” as he always seemed genuinely interested in how they were and what they were doing. He greeted each with a big hug and cheery hello that made them feel welcome and loved. He was a special man with a kind and generous heart. He was a good athlete in basketball, baseball, and football, and at one point spent time travelling with a baseball farm team as a pitcher. His pitching talent served him well carrying over to pitching horseshoes at family reunions where he was almost always the reining champ. Even in later years he was hard to beat although he was competing with an oxygen bottle over his left shoulder.