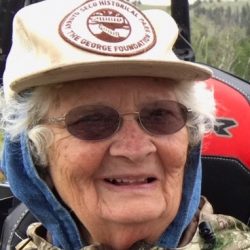 Her memorial is being held at Grace Community Church in Montrose, CO on Monday, January 13, 2020 at 3:00 p.m. FA celebration of life gathering is planned for summer, 2020 in Cimarron, CO.

Maxinne Soderquist passed away peacefully in her home in Montrose, Colorado of natural causes on January 6, 2020. She was raised in Alamosa, lived in Gunnison, Los Alamos, Paonia, Cimarron, and Montrose but her soul remained most at home in the Cimarron mountains. To all who knew her, she was the embodiment of grit, strength, and resilience against all odds. She was born the youngest of 11 children to Simon Off and Maryann Robran. Maxinne grew up in the San Luis Valley until she attended and earned her bachelor’s degree at Western State College in Gunnison, where she met her first husband, Dale Tate. In her words, it was love at first sight. They married spring of 1955 and moved to Paonia, where she was a homemaker and schoolteacher. Together they had two sons, Gene and Roby Tate. After being widowed at a young age, Maxinne re-married in 1966 and moved to the Soderquist Ranch in Cimarron, where she was a homemaker, caretaker, and co-rancher with her husband, John Soderquist. Together, they had two sons, Ty and Ryan Soderquist. Throughout her life, Maxinne lived with fierce determination and a love for ranch-life, the outdoors, and above all else, her family. Her Montrose trademark — anyone visiting most likely left with some Russel Stovers Candy in hand.   She was a member of the Cimarron Club for 53 years, and an avid gardener of her famous strawberries. Maxinne is preceded in death by her parents, elder siblings, her husbands, Dale E. Tate, John D. Soderquist, and her son, Ryon B. Soderquist. She is survived by many loving friends and family, which include: her sons, Gene Tate of Van, TX, Roby Tate of Richmond, TX, Ty Soderquist of Fruita, CO, her grandchildren, Eric Tate, Genae Lako, Evan Tate, Vanessa Runge, Nikki Kulcak, Ashley Soderquist, Tyler Soderquist, and 13 great-grandchildren. Her memorial is being held at Grace Community Church in Montrose, CO on Monday, January 13, 2020 at 3:00 p.m. Funeral Arrangements are being made by Crippin Funeral Home, 802 E. Main St. Montrose, CO 81401.  A celebration of life gathering is planned for summer, 2020 in Cimarron, CO.