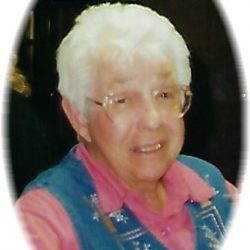 Mary was born in St. Louis, Missouri May 4, 1919 to Anton and Florence Willmann Schuster. She spent all of her childhood in Missouri with her brother, her only other sibling. He needed her on the “team” so she became a tomboy and a gifted athlete. She went on with her education and became a teacher. She was engaged to another man when she set eyes on Leo DeGuire at a catholic youth dance. She knew that he was the man for her. They were married in 1944 in St. Louis, Missouri. When Leo finished the war and schooling, the family moved to Parker, Arizona with the Bureau of Reclamation. They were then transferred to Phoenix, Arizona where they resided for 12 years. In 1962, Leo was sent to Colorado to choose the site for the center for the Colorado River Storage Project. He picked Montrose, and the family was transferred to Colorado. This is the place they loved and he refused any other promotions or transfers to stay here. They were together for 54 ½ wonderful years until Leo’s passing in 1999. Mary and Leo had five children, 11 grandchildren, and many great grandchildren. Diane (Ted) Nelson of Montrose; Nikki (Matt) Dougherty of Las Vegas; Jean (Rick) Adamson of Montrose; Leo “Chip” DeGuire of Las Vegas; and John (Stacie) DeGuire of Grand Junction. She adored her grand kids, Heather Nelson Rowan; Wendy Nelson Millsap; Theodore “Teddy” Nelson; Matthew Lawrence; Michael Lawrence; Gina DeGuire Cunningham; Robert DeGuire; C.J. DeGuire; Megan DeGuire Hadjuk; Jacob DeGuire; and Tanner DeGuire.

Mary loved her family, loved to entertain, and loved to be outside. She hosted a party for any excuse she could find. She had a soft heart and spent many years helping others. Every Christmas, she enjoyed painting her windows with holiday scenes. She was an avid swimmer, dancer, bowler, ping pong player, hiker, and golfer. She was also great at horseshoes. The family home was filled with many golf and bowling trophies and lots of talent contest awards for her “mean” Charleston dance. The years were spent on many camping trips, picnics, skiing, hikes and sightseeing drives. In the later years, traveling the world and going on cruises was a favorite pastime. She hated litter and spent her days with her two dogs picking up litter while walking the bike paths, Columbine School, and behind Safeway. In the 90’s she was awarded the key to the city for her good citizen deeds. The family will remember the fun, good life that we were privileged to enjoy with her. We know that she lived so many years because of laughter.

Mary passed quietly on March 16, 2017 in the good hands of the wonderful staff at Brookdale Sunrise Creek Memory Care and HopeWest Hospice.