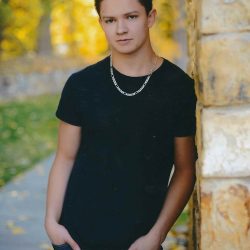 A celebration of Martine’s life will be held at Grace Community Church on Saturday, June 22 at 11am.

Martine James Luna was born Martin Pablo Garcia on July 17, 2000 in Montrose, Colorado to Geri (Garcia) Williams and Martin Garcia Enriquez. He became the adopted son of his Grandfather and Grandmother, James and Cathie Martinez on January 15, 2015, at which time he chose his name: Martine James Luna to honor his older brother Jacob Luna and his Grandfather, James Martinez.

Martine was a 2018 graduate of Montrose High School and had completed his freshman year at CMU. He was looking forward to his sophomore year. He was an employee of Stryker Builders during his summer break. He had goals and plans for his future, and he made immense effort each day toward reaching those goals. The stubbornness of his youth had matured into commitment and determination.

Martine was always very physical as a young boy and was active in soccer, baseball, football and lacrosse but found his home in wrestling, competing for the Montrose Indians for all 4 years of high school. At the beginning of his senior year, he considered not wrestling. But because he gave the sport credit for him being where he was, he wanted to see it through to the end of his senior year. He was not a quitter.

Martine was involved in Crossfit through high school and has continued his involvement throughout his life. He became a level 1 trainer at 17 as well as being certified to train youth. He began Jiu Jitsu after graduation, and trained alongside his brother, Jacob. The Luna Boys. A force to be reckoned with. Crossfit is where Martine met his mentor, John Brown, who he chose to pattern his life after. He recently described John as his father, his trainer, his coach, his confidant, his friend. John and Kelly were key influences in his life and development, and his Crossfit family was very important to him. He was at home there.

Martine also cared deeply about the boys that he met and interacted with at Gateway Youth Facility in Delta. He did maintenance work there during his freshman year at CMU, but within a period of time was becoming a mentor to them through his example.  Martine conducted P.E. classes voluntarily for these boys and through his involvement with them, he decided that counseling troubled youth would be his career path. It was his desire to help boys such as himself, and show them, by his example, that they could choose a different path. He wanted to be the mentor to them that John was to him and knew there was no better way to thank John than to save the life of a boy such as himself.

The family is requesting no flowers, rather please consider contributing to a Scholarship Fund in Martine’s name for the benefit of troubled youth who are trying to choose a different path for their future. This is something that Martine believed in and was dedicated to and will be a wonderful way to honor this incredible young man’s life. Please contribute to the MARTINE LUNA SCHOLARSHIP FUND c/o Alpine Bank, 1400 E Main, Montrose, Co 81401. Contributions can be made at any Alpine Bank Branch.

A celebration of Martine’s life will be held at Grace Community Church on Saturday, June 22 at 11am.