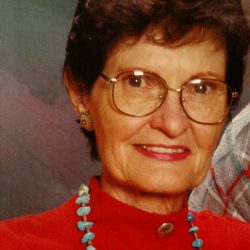 A service celebrating Marilyn’s life will be Saturday, September 29th at 11:00 at Victory Baptist Church in Montrose. In lieu of flowers, the family requests donations be made to HopeWest Hospice of Montrose.

Marilyn F. Roth passed away with her family at her side September 15, 2018 at Heidi’s Chateau. It was two months before her 90th birthday.

Marilyn Alice Field was born November 30, 1928 to Alvie and Ethel Field south of Montrose. The sixth of eight children, her favorite memories were of the summers spent horseback with her family at sheep camp at Cimarron and hunting camp at the upper end of Soap Creek. She was proud of being chosen Montrose County Fair Rodeo Queen and graduating from Montrose High School in 1947.

Marilyn taught for a year in the one-room school house at Cimarron and worked for First National Bank of Montrose. She married Matt Roth Jr. in 1957 and moved to Sapinero where she worked with Matt and Chuck and Donna Roth at Blue Mesa Service near the Gunnison River until Blue Mesa Reservoir began to fill.

In 1962, Marilyn and Matt moved to Montrose and Triple M Auto was her world for the next 43 years. Living above the business with their son Matt Henry, they ran a successful auto salvage business. Many young men worked for or lived with the Roths during those years and Marilyn enjoyed caring for this extended family.

Marilyn is survived by her son Matt Roth III (Beverly) of Montrose, grandchildren Molly, Travis, and Kate Roth, and Josie Kastendieck (Joseph), and brothers Dean Field of Las Vegas, and Robert Field and Gerald Field of Montrose. She was preceded in death by her parents, her husband Matt, brothers Shirley, Dale, and Ken Field, and sister Marge Marvel.

A service celebrating Marilyn’s life will be Saturday, September 29th at 11:00 at Victory Baptist Church in Montrose. In lieu of flowers, the family requests donations be made to HopeWest Hospice of Montrose. Crippin Funeral Home is charge of arrangements.