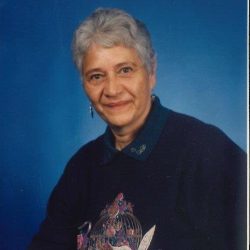 She had a passion for reading books, planting flowers, donating to charities and spending time outdoors.

Magdalena (Ann) Labrum daughter of J.R. Rogers and Angela Delgado was born on June 16, 1943 in Lampasas, Texas.  Heaven received another angel when she passed away peacefully January 28, 2021 while surrounded by her loved ones at her daughter’s home in South Carolina.

Annie grew up in Mineral Wells Texas before marrying Arthur Labrum who she had met while he was stationed at Camp Walters Army Base.  After marrying, they moved to Colorado and settled in Ridgway where they raised their family.  She enjoyed spending time visiting with friends while drinking a cup of coffee.  She had a passion for reading books, planting flowers, donating to charities and spending time outdoors.   Ann was an active member for several years of the Rebekah Lodge, Elks Club, Bowling Leagues and a devout Catholic.  She was well known as a fabulous cook of Mexican food and would often cater events at local restaurants and the Elks Lodge.

Ann was always smiling, laughing and had a funny sense of humor that was welcomed everywhere she went. She devoted her life to her family as a full-time wife and home maker and left her imprint on all those while fulfilling her special place in the world. She was kind, caring, compassionate and a giving person who helped others which is why she was loved and will be missed by so many.