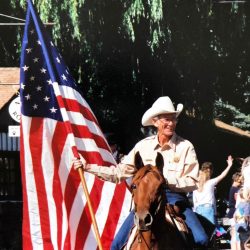 He loved his community and was actively involved from the moment he arrived.

Louis Von Schlosser passed away on November 29th, 2020 while surrounded by his loved ones after a fiercely fought battle with cancer.

On February 16, 1936, Louis was born to Clarence and Florence (England) Schlosser in Mason City, Iowa. He grew up on his family’s farm helping to raise hogs and corn along with his sister and brother while going to school.  Louis graduated in 1954. After graduation, he attended community college and worked for a brick and tile plant. In 1956, Louis and his family moved to Lynwood, California. In 1958, Louis was drafted and served 2 years in the Army, 82nd Airborne Division. Once his service was complete, he returned to California where he joined the Los Angeles City Fire Dept. He retired in 1988 after 25 years of loyal service.

In 1963, along with his future bride, Louie took his first big game hunting trip to Ouray County Colorado. He instantly fell in love, knowing one day this was the place he wanted to call home.  In 1964, he married Sue Ann McMahan. Together they had two children Mark and Shannon (Robinson). Later in life, he became Grandpa to Merrissa, Corbyn and Saren whom he dearly loved.

In 1984, Louie moved his family to Ridgway, CO. For the next four years he commuted between Colorado and California.  After retirement in 1988, he was finally able to permanently call Ridgway his home.  Over the years he enjoyed helping the local ranchers brand and work their cattle.  He loved his community and was actively involved from the moment he arrived. His passions were Ducks Unlimited, pheasant hunting, leader of the 4-H Horse Club, organizing and running Gymkhanas and most of all spending time with his grandchildren passing on his love of horses and attending their extracurricular events. In 1999 he became a member of the Ouray County Sheriff’s Posse and was an integral part of the group transitioning into the Ouray County Rodeo Association. Those who know him best, know the love he had for the fairgrounds and the annual Rodeo and the time and dedication he put into both. In 2014, Louie was honored as the Grand Marshall of the Labor Day Parade.

Louie was a well loved and respected member of the community.  He will be missed by all those that had the pleasure of calling him a friend.