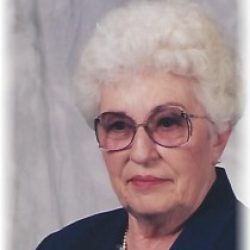 A Memorial Service in celebration of Loretta’s life will be held on Monday, April 10, 2017 at 10:00 am at Crippin Funeral Home Chapel. The Service will conclude at the Chapel.

Loretta M. Euwer, of Montrose passed away on April 1, 2017 at Hospice Care Center in Grand Junction, at the age of 91. Loretta was born January 30, 1926 to Edward and Marie (Talsky) Branda in Wilson, Kansas. She spent her childhood and received her education in Edson, Kansas. Loretta met and married Eugene E. Euwer on December 9, 1945 at the First Christian Church in Goodland, Kansas.

Before moving to Montrose, Colorado, Loretta and Eugene had resided in Mesa, Arizona, South and Lamar Colorado. They were members of the United Methodist Church in Montrose. Loretta enjoyed sewing, crafts of all kinds, reading and she loved to play bridge.