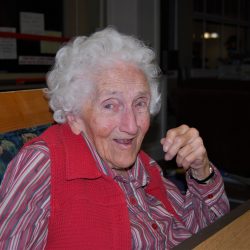 She leaves a legacy born of her dedication to education and volunteerism.

Please join us at a Memorial Celebration Of Life for Lois Curfman on Saturday, July 17 at 11 am at the Olathe United Methodist Church. This will be followed by a picnic at the farm, 61055 Rd., Olathe.

Memorial contributions may be made to the Curfman Scholarship Fund in care of San Juan Mountains Credit Union, 1102 South Cascade, Montrose, CO 81401

Lois Curfman passed away peacefully on January 4, 2021, at Colorow Care Center. She was 94. Lois touched many people during her life in Montrose County and she leaves a legacy born of her dedication to education and volunteerism.

Lois Price was born July 22, 1926, in Cimarron, New Mexico, the second child of W.O. and Jimmie Price, and began her teaching career in Cimarron when barely 20 years old. She married Lenden Curfman on November 27, 1948, and they relocated to Albuquerque, New Mexico where they established a dairy farm and began raising a family.

Lois and Lenden and their daughters moved to Olathe in February 1955 and set up housekeeping on the East Mesa farm which is still in the family. Lois began teaching in Olathe that same year starting with junior high math before settling into fifth grade where she spent 21 years, teaching two generations of Olathe children. In the meantime, she finished her BA and MA degrees in education. and was initiated into Kappa Delta Pi Fraternity for Education in 1969. The final four years of her teaching career were spent in the Middle and High School where she taught Title I reading and English. While not a big woman, she had a look which had a disciplinary history of its own when it came to maintaining order in the classroom! She took an early retirement in 1980 so she and Lenden could do some traveling, and there were many stories of adventures at home and abroad as they traveled together for nearly eight years before Lenden’s final illness and passing in 1988. Lois continued to travel with either a companion or family, enjoying this country as well as continuing to travel abroad.

Lois also believed in being involved in her community. She served on the Montrose Democratic Central Committee and the Ethics Committee at Montrose Memorial Hospital, as well as traveling all over the state as a Colorado Retired Service Employees Association liaison with AARP. Lois always had a good head for numbers, and this led her to volunteering with the AARP Tax Aide program where she worked until she was well into her 80s, as well as serving with VOA as the cashier for the Senior Meal Site in Olathe. She also enjoyed bowling for many years at the Rose Bowl and singing with the Del Rose Chorus of Sweet Adelines . Lois was a member of the Olathe United Methodist Church where she sang in the choir and served on the finance committee.

Lois was preceded in death by her parents, sisters Mable Rogers and Elsie Beasley, and her husband, Lenden. She is survived by daughters Carol Layton (George) and Mary Lynn, sister Mary Decker of Texas, brother Jack Price of New Mexico, three grandchildren and four great-grandchildren. A celebration of Lois’s life will be held in July. Memorial contributions may be made to the Curfman Scholarship Fund in care of San Juan Mountains Credit Union, 1102 South Cascade, Montrose, CO 81401