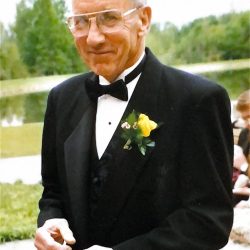 Lloyd L. Schmidt died peacefully at home on April 2, 2021, surrounded by his Colorado family.  He was born to a farming family in Payne, Ohio on November 4, 1931.  He earned a BS in business from Bowling Green University and an MBA from the University of Michigan.  His early career was in market research, but later in life he followed a dream and was self-employed repairing and restoring pianos.

Lloyd and his wife Joanie met at the Ullr ski club in Minneapolis, Minnesota.  They enjoyed alpine skiing together most of their lives.  They married April 30, 1960 and lived in Highland Park, IL before settling down on the western shore of Lake Harriet in Minneapolis, where they raised their three children.  Lloyd loved the outdoors and involved the whole family in camping, canoeing, sailing, biking and hiking.

Lloyd and Joanie moved to Montrose, Colorado in 1990.  Lloyd enjoyed driving his jeep throughout the West.  When he could no longer drive, he was often spotted zipping around town on his scooter.  He loved to sing and play the piano.

Service will be held at St Mary Catholic Church in Montrose, CO at 10:00 a.m., April 30, 2021. Burial to follow at the Cedaredge cemetery. Memorials may be made to HopeWest.