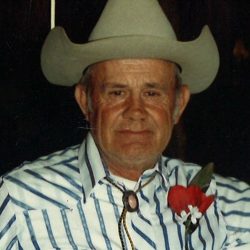 A memorial service is scheduled for 11:00AM on Saturday November 6, 2021, at Montrose Christian Church. Crippin Funeral Home is assisting Mr. Watson’s family.

Lloyd Eldon Watson was born May 7,1930 to David and Alice (Clemison) Watson in Kansas and was one of 6 children. The family moved from Kansas to Montrose, CO at a young age.

Lloyd married Jackie Lou Wright on June 10, 1950 (in New Mexico because they were too young to get married in Colorado at the time!) and had the privilege of sharing 62 years of

marriage until Jackie Lou passed away in December, 2012 at the age of 82. To their union were born 4 children: Jerry Lee, Rhonda, Randy and Leanna.

Lloyd loved his horses and cows, farming, and spending time with his family. He was known for many sarcastic one-liners like calling himself “the last honest horse trader” and telling friends

and family “if you don’t work, you don’t eat”. He also enjoyed watching people discover the horse he put them on wasn’t quite as gentle or calm as he said it was. Lloyd had a unique way

of starting projects and finding others to finish them while he sat back “supervising.” He cherished his friendships with his neighbors on Uncompahgre Road and had nicknames for just

about all of them. Lloyd’s life was filled with tragedy: losing his oldest son in a farm accident, his oldest daughter suddenly, two fires on his farm – the second of which took his home, losing his

wife to cancer, and breaking his neck in a car accident, but he was a resilient person that kept his head up and brightened every room he was in.

Lloyd spent his final 6 years living with his daughter, Leanna, but that didn’t stop him from frequent trips to see his farm, cows, friends and family.

Lloyd is survived by his son, Randy, and daughter, Leanna and husband Greg. His siblings David, Clarence, Clifford and Florence and husband Bill. Grandchildren include Brian Watson

to Lloyd. A special ‘thank you’ to Nicole Grater, his caretaker during the work week, who took such good care of him for over two years, and to the staff at Valley Manor for his short stays there over the years.

Lloyd will be greatly missed for his sense of humor and love of animals. In the words of Donna Flowers, “We’ve lost a true Legend.” A memorial service is scheduled for 11:00AM on Saturday November 6, 2021, at Montrose Christian Church. Crippin Funeral Home is assisting Mr. Watson’s family.