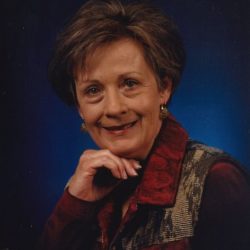 A celebration of life gathering will be held at Riverbottom Park in Montrose near the duck pond at 10am on Saturday, July 11th. Social distancing and a mask will be required.

She was born April 20, 1942 in Logansport, IN. Linda was a life-long story teller and if you asked her, she came to Kansas in a covered wagon! Her family moved from Kansas and she grew up in Lamar, Colorado graduating from Lamar High School in 1960.

Her Daddy’s nickname for her was Dutch. She considered herself a ranch hand by the age of 8, and loved helping her daddy on the ranch. Heaven forbid if she got stuck in the kitchen cooking ranch hand meals with her sister, Wanda. In high school she joined the local saddle club and the Dudes and Dames Dance Club. After high school she worked at the corner drug store at the soda fountain and met a guy selling shoes down the street in Lamar. She married that guy, Ron Crook in December 1960. They moved to Garden City, Kansas, and eventually opened their own shoe store. They had 2 children, Teri Hensen and Jim Crook. Linda was a stay at home mom, during which time she pursued her life-long passion of art. For many years she used her artistic talents as a professional kitchen designer all the while painting on rocks, antiques and pretty much anything that could be painted on.

In the next chapter of Linda’s life, she moved to Sedalia, Colorado and married Gary Guy in 1985. She continued her passion of art, painting and selling her wares at local art and craft shows and various local shops and antique stores. If you ever visit Bud’s Bar in Sedalia be sure to notice the painted bull skull above the bar. They made their forever home in Montrose, Colorado. She loved to golf, paint and garden and also worked as a kitchen designer while in Montrose.

Linda was a spiritual person and this was very important to her. She had a gift for helping others and the community. Through her involvement with the community she was commissioned to paint the Peace Pole that now stands at the Ute Indian Museum in Montrose. She was also fascinated with the history of native Americans.

Linda was diagnosed with Dementia in 2013. She had a difficult journey because of this cruel disease and moved into Colorow Care Center in January of 2019. She eventually succumbed to Alzheimer’s and passed peacefully.

A celebration of life gathering will be held at Riverbottom Park in Montrose near the duck pond at 10am on Saturday, July 11th. Social distancing and a mask will be required.

Arrangements are under the care and direction of Crippin Funeral Home.