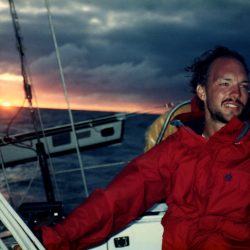 Come celebrate Levi’s life on his 60th birthday, Sunday, April Fool’s Day, 2018 at 4 pm at the Ridgway Town Park with pot luck to follow at the community center.

Levi Paul Heinold, 59, of Ridgway, Colorado, died Sunday, February 25, 2018. Levi spent the afternoon hiking his favorite trails, viewing the San Juan Mountains, and peacefully died while sitting in one of his favorite places.
He was born April 1, 1958 in Moses Lake, Washington to Thomas and Janet Obermann Heinold. On July 7, 1990, he married Melinda Hamrick on Hastings Mesa near Telluride, Colorado. They had two children, Alsace and Hayden.
As a young man, Levi was in a life-changing vehicle accident, which reinforced his great appreciation for adventure. After being told that it would be unlikely for him to walk again, Levi walked the Appalachian Trail from Georgia to Maine and the Pacific Crest Trail from Baja, Mexico to Canada. He loved to snowmobile, sail, mountain bike, ski, travel, and enjoyed every dimension of the outdoors. In general he liked a good adventure, but above all he loved his family and was a devoted husband, father, son, brother and friend.
In 1988 Levi and Melinda founded a plumbing and alternative energy business, Mountain Power Company and Backroad Enterprises, in San Miguel County. Levi’s brother-in-law, Scott Hamrick, joined the business and it flourished, as did Levi’s reputation as an alternative energy guru. Levi will be remembered for his unselfish acts of kindness, ability to fix almost anything and his crazy sense of adventure. Levi was a friend to everyone.
Levi is survived by his wife, Melinda; daughter Alsace; Grandmother Alsace Heinold; brothers, Bret and Clint; many cousins, nieces, nephews, in-laws and friends. He was preceded in death by his son Hayden; his father, Tom; grandparents, Paul and Gladys Obermann and Levi Heinold. His mother, Janet, preceded him in death by several hours.
Come celebrate Levi’s life on his 60th birthday, Sunday, April Fool’s Day, 2018 at 4 pm at the Ridgway Town Park with pot luck to follow at the community center.