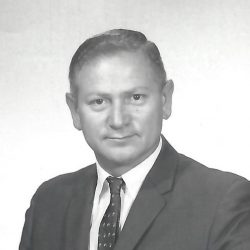 Lajos “Louie” Kelemen Sr., 90, of Montrose, Colorado passed away March 10, 2020, at Colorow Care Center in Olathe, Colorado where he received excellent care from the Colorow staff and HopeWest Hospice.

Louie was born August 25, 1929 in Mecsér, Hungary, to Lajos and Ilona Kelemen.  He was the oldest of 9 children.  He was married to Maria Limpár on May 11, 1951 in Mosonmagyaróvár, Hungary.

Lajos served in the Hungarian military as a tank driver and instructor.  He and his wife came to America in 1957 with their two sons ages 5 and 1 and lived in the Denver area for about 35 years.  While in Denver he worked as an auto mechanic and eventually opened his own shop specializing in imported vehicles.  He later worked and retired from Coors Brewing Company in Golden, Colorado.  After retirement He and Maria lived in Arkansas for a short time then moved to Montrose.  He has lived in Montrose for the past 25 years.

He enjoyed fishing, hunting and gardening.  He cared for an immaculate huge garden that included 9 grape vines and 15 fruit trees. He was very proud of his garden.  He loved all his family and deeply missed his Hungarian relatives.  He often bragged about what a wonderful cook his wife Maria was and he greatly enjoyed traditional Hungarian dishes.  He often told stories about growing up near the Danube River and some of his teenage shenanigans. He was deeply loved by all who knew him and will be greatly missed.