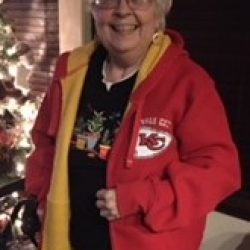 In lieu of flowers donations can be made to HopeWest Hospice, 725 S. 4th Street, Montrose, Co. 81401, Montrose, Colorado.
A celebration of life will be held at the All Saints Anglican Church in Montrose on Saturday, June 16, 2018 at 3:00 P.M. with inurnment to follow the service at Grand View Cemetery.

Kathleen (Kathie) Adamson, a friend to all, passed away peacefully on May 26, 2018 in Montrose, Colorado surrounded by family and friends who will clearly miss her.
Kathie was born on November 29, 1942 in Salt Lake City, Utah to Wayne and Emma Lou Hamilton Adamson. She was raised and educated in Utah. In 1965 she received her bachelor’s degree in education from the University of Utah. She went on to teach elementary school in Salt Lake City, Lawrence Kansas and Logan, Utah.
Kathie subsequently earned her Master’s degree in communications from Utah State University in Logan, Utah. In 1986 Kathie became the Assistant Director of Placement at Utah State University. She organized and facilitated conferences throughout the United States and she became the liaison between the university and the United States Government including the Central Intelligence Agency and the U.S. Air Force.
In 1986, as part of her Master’s Thesis, she authored the book “A Handbook For Re-Entry Women Into The Workforce” In 1989 she was awarded the outstanding employee of the year at Utah State University
Throughout Kathie’s life she had a love of music. She was a member of several choral group’s including the “Utah Choral” where she performed at many venues across the U.S. including Carnegie Hall in New York City.
In 1998 Kathie retired from the university and moved to Montrose to be close to her family. When she moved to Montrose, she also found a community and neighborhood who embraced her. Kathie enjoyed many activities that kept her very busy. She volunteered at the hospital and loved to go to coffee with friends and neighbors. She loved to sing and was active in church choirs. She jumped at any opportunity to go out for shopping, lunch or coffee and was such a joy for her companions. When health problems prevented her from remaining in her own home she made the decision to move to an assisted living facility with her beloved dog Sneffles. Living there, she continued to be active in the community and made many friends with staff and other residents. In June 2016, she had a major health crisis that resulted in a flight to Denver and a three-month stay in hospitals in that city. Despite this very difficult struggle, Kathie was always cheerful and had a great attitude. Staff loved her. After she came back to Montrose, she enjoyed two years of relatively good health and was able to resume many of her activities.
Kathie was preceded in death by her father, Wayne, and mother, Emma Lou. She is survived by her brother, Rick (Jeanne) Adamson of Montrose, nephew Alexi (Brenda) Adamson of Montrose and nephew Brad Adamson of Littleton, Colorado and her very dear friend, Mabel Risch of Montrose.
In lieu of flowers donations can be made to HopeWest Hospice, 725 S. 4th Street, Montrose, Co. 81401, Crippin Funeral Home in Montrose is in charge of arrangements. A celebration of life is planned at the All Saints Anglican Church in Montrose on June 16, 2018 time to be announced, with inurnment to follow the service at Grand View Cemetery.