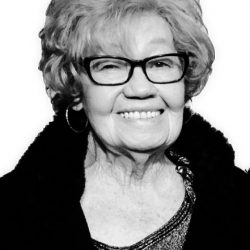 The family would like to extend an invitation to all who wish to attend services for Kellie at St. Mary’s Catholic Church in Montrose on Friday, January 17th at 10am, followed by a graveside service at Valley Lawns.  A reception at The Elks Lodge will follow the graveside service and is open to all.  A rosary and vigil will also be held on Thursday January 16th, from 6pm to 8pm at the Crippin Funeral Home Chapel.

A life well lived is the most exquisite work of art.  There are not enough words to capture a life well lived but Katherine “Kellie” DiCamillo, embodied its very essence.  Born on August 31st, 1936 in Rochester, Texas, Katherine Hawley was raised by her grandmother who instilled in her hard work and a woman’s commitment to her family.  This relationship left a remarkable impact on Kellie and gave her a foundation to grow a family and find success as a businesswoman over the course of her life. In 1956 she moved to Gunnison, Colorado where she obtained a job at the Gunnison Telephone company as a switchboard operator.  It was in Gunnison that she met her lifelong love and husband Louie DiCamillo whom she married in 1958.  In the winter of 1959, they were blessed with their only child Roxanna “Roxie” Marie.

In Kellie’s early years as a mother and wife, the family moved to Montrose, Colorado the family home of her husband Louie. It was in Montrose that Kellie fell in love with the entire DiCamillo family.  Louie had ten siblings and Kellie formed lifelong bonds with each of them, their spouses and most certainly all her beloved nieces and nephews. She found great pleasure in the bonds of family and together, Kellie and Louie, embraced so many family members in times of celebration and hardship.

From their only daughter Roxie, they added two grandchildren, Chad Eric Hovde and Shelby Marie Hovde (Holt) who later each had two children respectively, Connor Eric and Amelia Marie Hovde and Brooklynn Marie and Levi Garrett Holt. Kellie became widely known as “Gram” and worked daily to honor her family and put unbelievable effort into her relationships with them.  Gram loved family deeply and without condition, she often said that charity starts at home and believed firmly in giving of herself to her family. Her back porch was renowned for hours of Gram “therapy” to those she loved or even those who stopped by.

Though it was not as common for women to work outside the home Kellie always found work fulfilling.  She worked in the 1960s and 70s at Reeve’s Clothing Store in Downtown Montrose.  It was there that she cultivated her love for fashion and style.  In the early 1980s she purchased C.B Liquor on South Townsend.  For almost three decades Kellie grew her business into a regional hotspot.  She cultivated relationships with everyone from coal miners to celebrities, who all came into the store asking specifically for Miss Kellie.  It brought her great pleasure to teach the art of business management to her grandson Chad Eric and from it grew a lifelong bond between them.  Kellie also participated and found success in many varied entrepreneurial ventures with Louie including land development, real estate and she very much supported her husband’s love for farming and ranching.

In the 2000s Kellie and Louie moved permanently to Bryan, Texas to be near their grandson Chad Eric and closer to their daughter Roxanna and granddaughter Shelby.  During her time in Bryan she visited Colorado regularly but enjoyed many years of memories and direct daily involvement in her daughter, grandchildren and great grand children’s lives. Kellie enjoyed shopping, antiquing, coin collecting and discussing her finds over cocktail hour.

Kellie certainly lived life well and leaves behind a legacy as the Matriarch and last surviving member of her family generation.  Her impact will be known and recounted for years to come as she was a tiny woman who left an unquantifiable mark of love on her family and many friends.

Kellie is preceded in death by her paternal grandmother, her husband Louie DiCamillo,  as well as siblings in-laws: Lena and Joseph Sully, Ruth and Deno Frigetto, Rose and Lew McKean, Francis and Ernie Sulley, Della and Pete DiCamillo, Anges and Sam DiCamillo, Dominic “Shorty” DiCamillo, Flora and Joe DiCamillo, Angelina and Felix DeJulio, and Nancy and Raymond DiCamillo.  She is survived by her daughter Roxie DiCamillo, grandson Chad Hovde and partner Grant Conlee plus their children Connor, Millie, Jess and Davis, and granddaughter Shelby Holt and husband Bill Holt plus their children Brooklynn and Levi, and many cherished nieces and nephews.

The family would like to extend an invitation to all who wish to attend services for Kellie at St. Mary’s Catholic Church in Montrose on Friday, January 17th at 10am, followed by a graveside service at Valley Lawns.  A reception at The Elks Lodge will follow the graveside service and is open to all.  A rosary and vigil will also be held on Thursday January 16th, from 6pm to 8pm at the Crippin Funeral Home Chapel.