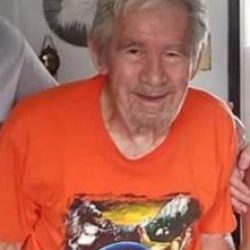 A Remembrance to Celebrate the life of Joe will be held June 15th, for family and friends, announcements will be sent at a later date.

Joseph (Joe) Robert Lyke age 83 of Montrose passed away Sunday, May 19, 2019 at the Mantey Heights Care Center in Grand Junction. Joe was born on August 23, 1935 in Las Vegas, Nevada to Arthur Lavergne and Anna Francis (Jereb) Lyke.  Joe spent his childhood in Rock Springs, Wy, and graduated from Torrington High School, he married the love of his life Christa Peters on March 14, 1964 in Aurora, Colorado. Joe proudly served his country in the United States Navy.

Joe spent most of his working life, in the Technical Oil Treatment Service, as well as a Mechanic. His special interest included his beloved family, as well as restoring and working on old cars, and as he put just piddling around the garage always working on something. Two of his funny, silly quotes were “Though the teeth and past the gums look out tummy here it comes.” or “Have you ever seen an elephant with a mohawk?” always keeping family members laughing or rolling their eyes. Joe was a loving, kind, funny, and had the greatest sense of humor. He was a great husband, dad, grandfather, great grandfather and brother. He will be dearly missed by all who knew him.

Joe is survived by his loving wife of 55 years, Christa Lyke of Montrose, his children Jeanny Pierce, Debbie Ann Heckeroth, Sandra Lyke-Williams, Garry Williams, Nicolaas Lyke and Justin Williams. As well as his grandchildren Jessica Roth, Ken Heckeroth, and great grandchild, Draven Heckeroth, his brothers Jim Lyke of Arlington, Tx; and LaVerne Lyke of Hope, Texas. Joe is also survived by many non-officially adopted children who know who they are, and whom he loved very much.

A Remembrance to Celebrate the life of Joe will be held June 15th, for family and friends, announcements will be sent at a later date.