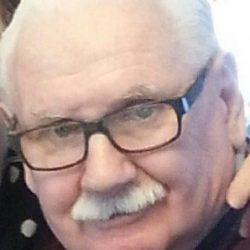 Services will be at St. Mary’s Catholic Church on June 5, 2019 at  10:00 am, with arrangements being handled by Crippin Funeral Home. Internment at Cedar Creek Cemetery will immediately follow the service, with a luncheon reception afterward at the church.

Joseph Patrick Sheehan died on May 30, 2019 after a 5-month battle with lung cancer. He was 77.  Services will be at St. Mary’s Catholic Church on June 5, 2019 at  10:00 am, with arrangements being handled by Crippin Funeral Home. Internment at Cedar Creek Cemetery will immediately follow the service, with a luncheon reception afterward at the church.

Joe was born on Good Friday, April 3, 1942, in Butte, Montana to father James (Jim) Edward Sheehan and Margaret (Marg) Mary Twomey.  Throughout his teen years and early adulthood, Joe held many jobs and learned a variety of skills. He was a hard rock copper miner, worked in a smelter, was a roust-about in the oil fields, and a bellhop.

He graduated from Butte Central Boys Catholic High School in 1960, then enlisted in the US Army, serving as a cryptographer in Europe from 1960-1963 with his best friend, John McCarthy.  Joe graduated from college and began his career as a counselor for the State of Montana, working with adults with disabilities by helping them with career and education counseling. Joe was a life long learner with a passion for World War II, and history in general. He curated an extensive personal library of books on every topic, from world religions to modern fiction.

In 1976 Joe married the love of his life, Patty Sequenzia, moved to Denver, Colorado, and together raised two wonderful daughters. Joe worked for the State of Colorado where he continued his work as a vocational rehabilitation counselor. In 1984 the family moved to Montrose, Colorado where he and Patty made their home until his death, and Joe continued to have a positive impact on the clients he served in Montrose, Gunnison, Hinsdale, Delta, Ouray, and San Miguel counties.  Prior to passing, Joe mended his relationship with God and found comfort in his faith, leading to a renewed passion, which brought him comfort.

Joe is survived by his wife, Patty; daughters Jennifer DelTonto, and Janine (Glen) Suppes; grandchildren Brett (Raymie) Suppes, Tyler Suppes, Kelly Suppes, and Hunter DelTonto; and one brother, Hugh Sheehan. He was preceded in death by both of his parents.