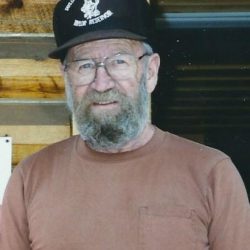 J.D. Herman was born in Montrose on September 6, 1927 to Judge Earl J. Herman and Lorene Mable (King) Herman. His family lived at Sams, Colorado on Dallas Divide where his father was the post master and proprietor of the general store. They later moved to Montrose where his dad was a County Judge. J.D. attended Montrose schools and graduated Montrose High School in 1945 where he was a member of the tumbling team.

Upon graduation he joined the U.S. Navy. After basic training in San Diego, California he was deployed to the Philippines until he was honorably discharged. After serving his country he attended Western State College for a short time. He then returned to Montrose and worked for Cliff Baldridge at the original City Market. He was a boy scout leader in 1949-1950 and then helped again with his grandson, Joshua, in the late 1990s. J.D. was a life member of the Montrose Elks Lodge #1053.

On April 9, 1949 he married Rosie Fitzgerald in Montrose at the Congregational Church with Mark T. Warner officiating. They just celebrated their 70th wedding anniversary.

In May of 1952 J.D. and Rosie bought the Taylor Park Boat House on Taylor Reservoir. Together they owned and operated the boat concession for 46 years. Through this time they made lifelong friendships with people from all over the United States. He will be remembered by their customers as always having fishing tips to share and helping others. There was always someone that needed his help with getting a fish hook out of their finger or ear, a car or boat motor that wouldn’t start, finding a lost person, fighting forest fires, medical emergencies, private boats that had swamped, vehicles stuck in the mud or snow, and all the other challenges that went along with recreation in the mountains. He made hunters and fishermen out of his kids and grandkids, and fishermen out of many other kids that came to the boathouse. A lot of fond memories were made with nearly a hundred “boat boys” who worked for and lived with J.D. and Rosie throughout the years at the boathouse.

His happiest times were when he was spending time with his family and friends, or in the outdoors hunting and fishing.

J.D. is survived by his wife Rosie of 70 years; his daughter Carol and husband Dee Stryker; grandson Taylor Deines; grandson Joshua and wife Brittany Deines all of Montrose. He’s also survived by his son Daniel of Alaska and grandchildren Joseph, Tony, Danielle, Mister and Dano of Denver and numerous great grandchildren. He was preceded in death by his parents Earl and Lorene Herman; sisters Isabel Herman, Cora Soulier and Earlene Simoens; and grandson Jason Herman. Also preceding him in death was his special Uncle Burl Herman, numerous aunts, uncles and cousins.