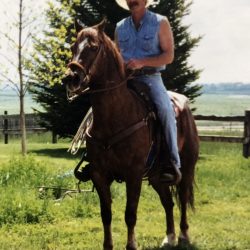 A Celebration of Life will be held at 3:30pm on June 29, 2019 at Lizardhead Wilderness Ranch near Telluride. If you plan to attend, please contact Shawna at (970) 708-3774 for directions and further details.

John Stanley Blakney, 67, passed away on June 7, 2019 at his home in Ouray County surrounded by his family.  He was diagnosed with Melanoma 15 months ago, and lived this past year with grace, awareness, and gratitude for the moments spent with loved ones.

Johnny was born in Austin, Texas on April 10, 1952 to Stan and Elinor Blakney.  Their third child, with older brother Richard and sister Sandra, and younger sister Bonnie. He graduated from Southwest High School in Fort Worth Texas in 1970 with many athletic accolades including 2nd best high school high jump in the Nation in 1969 and this summary provided by a friend from high school “Johnny Blakney: Lettered two years in Football….Lettered three years  each in Basketball and Track….Won District track meet in High Jump ‘68,69, 70….Won State Track Meet in High Jump 69,70—in ’70 set new U.I.L and 4A-10  Record 6’101/2″ All-State Track Team member ‘69,70 High School All- American Team also Graduated Magna Cum Laude. Was a good teammate.  Rest In Peace Brother.”

Johnny earned a two sport Division 1 full ride scholarship to OU in 1970, participating in Basketball and Track.  He transferred to Texas Christian University to be closer to Susie and continued to participate in Basketball and Track.  During this time he competed with the likes of Basketball Legend Pistol Pete Marovich and former High Jump world record holder Dwight Fosbery.  He enjoyed telling the story of how he kept Pistol Pete to 32 points, which was 2 points under his average of 34, so he considered it a win!  It was also said that he cleared 7’ 2” in practice when the High Jump world record was 7’4”, though his best mark in competition was 6’11”.  He was known as a wild man, as well as a standout athlete.  Another of his claims to fame was having the record for the quickest player to ever get kicked out of a Southwest Conference Basketball game for “fighting” for a loose ball, after only 3 seconds on the court.  Sports injuries and family responsibilities led him to choose to end his athletic career after college.  He graduated in 1975 with a degree in Accounting.

John married his high school sweetheart, Susie Reynolds, on August 25th 1973, they celebrated their 45th wedding anniversary last year.  Together they had daughter Shawna (LaBorde) and son Robert. They consciously raised them to be as much friends as they are family.  He taught them how to ride horses, work cattle, be honest, play sports, compete for championships, enjoy nature, and love the mountains.  He will forever be known as the best Pappy to his six grandchildren Colter, Eli, Gideon, Dylan, Noah, and Grace, with whom he enjoyed fishing, hunting, building, chopping, sharpening, reading and telling many colorful stories.

He began working for his father’s construction company in his youth, assisting in building many of the highways, bridges, and power plants in Texas.  Always enamored with western culture, he raised cattle and kept horses most of his adult life, starting in Texas, and continuing after moving to Colorado.  Bar-B-Q and Texas go together, and so it was for Johnny.  He was well known for his mouth watering ribs, homemade salsa, fresh peppers, garden vegetables, 12-pack chicken, sausage and “Pappy ham”.  Johnny managed the Parts Department of family owned Reynolds Olds, Cadillac/Subaru in Fort Collins, Colorado while raising his children.  He then owned and operated a trucking company for 10 years on the Front Range.  Susie and Johnny chose to uproot and join their children on the western slope in 2007 and have enjoyed many years building memories with their kids and grandkids since that time.

Johnny is a member of a very large and close knit extended family. He was, no doubt, welcomed on the other side by a crowd including his parents Stan and Elinor Blakney, grandson Tyson LaBorde, brother Richard Blakney, sister and brother-in-law Sandra and Dave Reitmann, brother-in-law Bart Tompkins and countless others. The family members that remain include his wife Susie, daughter Shawna (Trevor), son Rob (Sheila), his beloved grandchildren Colter, Eli, Gideon, Dylan, Noah and Grace, his sister Bonnie (Lester), brothers and sisters in law,  many cousins, nieces, nephews, aunts and uncles. A Celebration of Life will be held at 3:30pm on June 29, 2019 at Lizardhead Wilderness Ranch near Telluride. If you plan to attend, please contact Shawna at (970) 708-3774 for directions and further details.