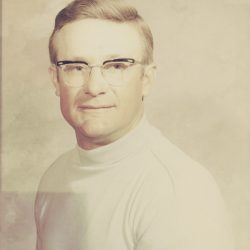 John Edward Appelhanz, lifetime resident of the Montrose / Olathe area, passed away on Friday, November 5, 2021, at the age of 89.

John E. was born on January 23, 1932, to John and Mary (Unrein) Appelhanz.  He attended various country schools as the family moved to different farms they owned around the Valley.  He enjoyed trapping and hunting with his brothers, as they grew up.  He graduated from Montrose High School in 1950.  He then served two years in the United States Army and was stationed in Korea.  He rose to the rank of sergeant.  After he was honorably discharged from the Army, he rejoined the family farming operation with his parents and four brothers.  John E. always enjoyed raising livestock, whether it was a few sheep and goats, or horses and cattle. After the Appelhanz Brothers purchased Forest Service permits in both the Tabeguache Basin and Hanks Valley, John E. spent most of his time taking care of the cattle operation. He always had dogs and cats, and there wasn’t a stray dog or cat that he didn’t take in and care for.

John E. was a kind-hearted, generous man and extremely honest.  He really enjoyed visiting with everyone he met.  He was happiest just living a simple life, was patient and never really complained about hardships that came his way.  He was good-natured, and he liked teasing his nieces and nephews as they grew up. He very much enjoyed listening to jazz music.