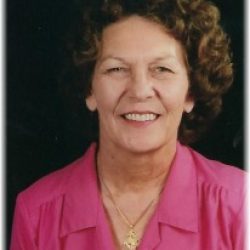 A Memorial Service to honor Joan’s life will be held at Victory Baptist Church, 2890 North Townsend, Montrose, CO; on Thursday, at 11:00 a.m. With services concluding at the church. Arrangements are being handled by Crippin Funeral Home and Crematory.

Joan Lucille Abbott, 85, surrounded by her family went to be with her Lord and Savior Jesus Christ on March 27, 2017 at Colorow Care Center in Olathe, Colorado.

Joan was born June 7, 1931 in Salt Lake City, Utah to her parents Nathan Henry Hecker and Gladys LaVern Hecker. At a young age the family moved to Nevada where her father pursued work as a miner. Joan spent her younger years and early adult life there, and graduated from Tonapah High School in 1948. She lived in two or three towns in the state and moved back to Tonapah. There she met and married Robert Abbott on April 1, 1963. They always chuckled when they told everyone they were married on April Fool’s Day: This April 1rst they would have celebrated their 55th wedding anniversary.

In 1966 the family moved to Olathe, Colorado and lived on the family farm, raising their children in the Olathe Schools. Their next move was to Ridgway in 1976 to run their business, Abbott Ready-Mix. They spent the next 32 years there until they retired and moved back to the Montrose area until her death.

Joan was preceded in death by her parents, two sisters, and a brother, and two granddaughters Cheryl and Rebecca Abbott (cousins). She is survived by her husband Bob, sons Alan (Paula) Abbott, Tony (Faye) Abbott, and daughter Ella Lani. She was blessed with 11 grandchildren and 12 great grandchildren.